That’s what I call patriotism and respect for the President. Thomas Gunderson was shot in the leg during the Mandalay Massacre in Las Vegas. President Trump and Melania visited him in the hospital. In pain and struggling to stand, this man stood anyway to shake the hand of President Trump and Melania’s as well. It was inspiring and moving. He said he could not see himself lying in bed when the President of the United States was in the room. To stay in bed when he could stand at all, in his view, would be disrespectful. The left could learn a lot from a man who could have easily lost his life because of the largest mass shooting in US history.

The video shows Gunderson painfully rising to greet the First Lady and trying to stand until Trump entered the room. He had to sit for a second, but rose again for the President. This happened at University Medical Center in Las Vegas. A place, I unfortunately, know too well. Melania pleaded with him to not stand, but Gunderson was determined. “Hey, this guy looks tough to me,” the President said as he shook the shooting victim’s hand. Tough indeed. Vegas tough. 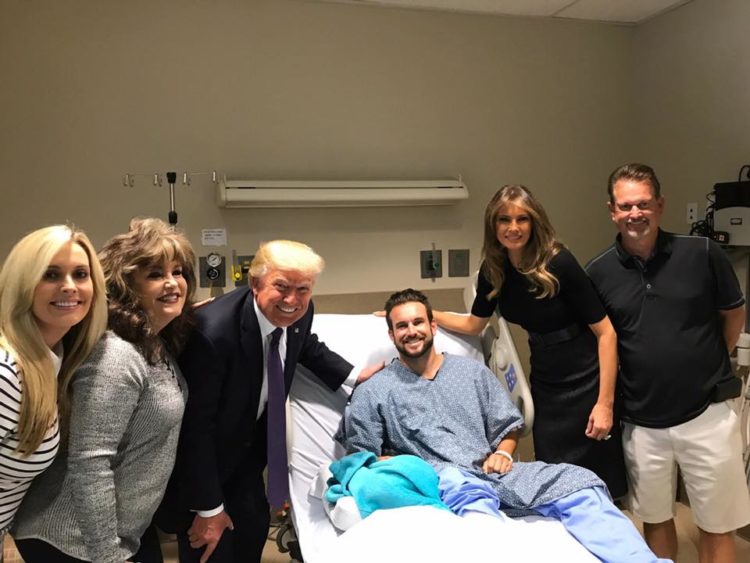 Gunderson is from California and he posted the video to Facebook explaining, “I will never lie down when the President of this great country comes to shake my hand!” I’m sure the trolls descended on this guy and gave him a ration of crap for that. Oh well… I don’t think he cares. “There may be plenty of issues in this country, but I will always respect my country, my president, and my flag. Shot in the leg or not, I will stand to show my President the respect he deserves!” Gunderson added.

When Thomas Gunderson first heard the gunfire, he thought a speaker had malfunctioned, or maybe someone had shot off some fireworks. A lot of people thought that, but it’s never fireworks. Then he heard the screams and the 28 year-old from Newport Beach, California realized he was standing in the middle of a killing field. Thomas Gunderson heard the first gunshots and then jumped into action, helping people to safety outside the Mandalay Bay Resort and Casino. He was one of many heroes that day… then he was shot. “I went straight to the ground. It didn’t hurt. My body numbed up,” he told me. “I was covered in a pool of blood — it was shooting out. It was literally everywhere.” Thomas said he dragged himself behind a row of bleachers. “I was getting scared at that point,” he said. “I thought I might bleed out.” Thank goodness he didn’t.

Gunderson is a Trump fan all the way. On his patient info whiteboard in his room, he wrote “#MAGA” under the section reading, “what’s important to me.” Good for him. President Trump later told the media, “I just met some of the most amazing people. We met patients that were absolutely terribly wounded.” The latest count in Vegas is 58 dead (not including the killer) and 489 wounded. 317 of those have been released. “The doctors, the nurses – all of the people at the hospital have done a job that’s indescribable,” the President said. Yes, they have and bless them for it.