VIDEO: Fight breaks out and six people are arrested when leftists attack Trump supporters at protest

Surprise…[1] there was a protest in Florida yesterday against military action in Syria… and it turned violent. Six people wound up being arrested. Mostly for punching police officers. The primary instigator? That would be one 26 year-old Connell Crooms. He’s deaf, but it doesn’t stop him from beating on Trump supporters. Then his mother got up there and asked if this is what we do to disabled people now… well, yeah… if they start beating on others and the police, we sure do. Sorry, deafness is not a pass to be a violent thug.

And I’m with the commenter who said the following: “If you’re against bombing an airfield that used chemicals to kill innocent women and children, you’re a special kind of stupid…doesn’t matter who you voted for…” Exactly. I support President Trump sending a strong message to Assad to knock off gassing his own people… especially little children. It also made a statement to Iran, Russia, China and North Korea. Don’t poke the American badger or you are liable to get savaged. And bonus, it was a woman commander who launched those Tomahawks. So jealous. 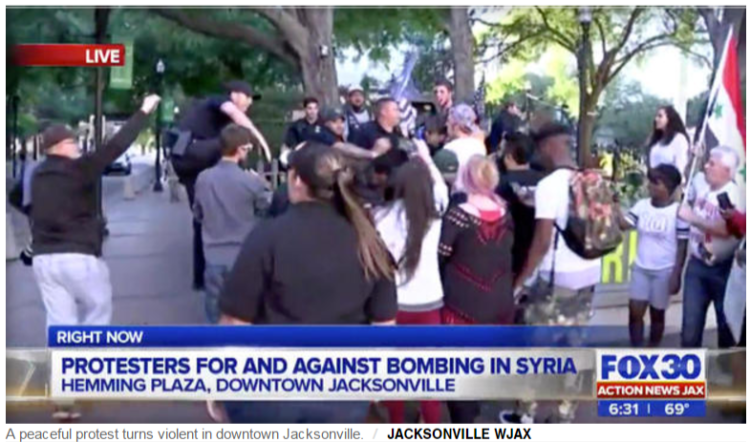 JACKSONVILLE, Fla. – Six people have been arrested in Florida after a protest against U.S. military action in Syria[3] turned violent.

Authorities say a peaceful protest in downtown Jacksonville escalated into a confrontation between demonstrators and their opponents Friday night.

Jacksonville Sheriff’s officials estimated[4] between 100 and 200 people were in the crowd. Officers said they were punched and kicked as they tried to break up the melee but no one was seriously hurt.

Six people were arrested, including the protest organizer. The charges range from battery on a law enforcement officer and resisting police with violence. One person was charged with marijuana possession.

Police told CBS affiliate WJAX-TV that one man at the protest was waving a pro-Trump flag while several protesters “stood in his face while recording him with cellphones.” They said Crooms “began to yell ‘[expletive] the police’ and the protesters followed his lead.” Deaf or not, that kid was leading the pack. The man holding the Trump flag began to yell pro-police statements into a megaphone, police said, and Crooms went after him. A struggle ensued between police and Crooms, who was taken to a nearby hospital with non-life-threatening injuries. Except his mama was all butt hurt over it.

All ages got in on the fun, even a 74 year-old man, who was also arrested. A number of leftists were wearing face coverings to conceal their identities, so they were looking to stir the pot before they ever got there. So very brave… not. The protest was mostly peaceful in downtown Jacksonville – 100 to 200 people took part in it. It wouldn’t matter what President Trump does now… they’ll protest it. Any excuse to get their violence on.