President Trump was at the Alabama Crimson Tide – Georgia Bulldogs face off last night in the Atlanta’s Mercedes-Benz Stadium. The venue packed 71,000+ fans in there and tens of thousands cheered as Trump came on the field with the Georgia ROTC flanking him. Trump confidently marched out to stand for the National Anthem with the ROTC on either side of him. They saluted and Trump put his hand over his heart. But the biggest moment came when the cameras panned to a military installation where the soldiers also stood at attention for the National Anthem. The crowd roared their approval.

The halftime performance featured Grammy-award winning artist Kendrick Lamar, who has been very critical of Trump in the past. Considered one of President Obama’s favorite artists, Lamar has been known to include politically charged lyrics in some of his Grammy award-winning music. In his song “The Heart Part 4” released last year, the rapper calls Trump a “chump” and refers to Russian influence in the 2016 presidential election. The joke was on him as Trump left at halftime to return to the White House. I’m sure that was a statement meant for Lamar personally. As Trump, walked off Air Force One just after midnight and climbed into a black SUV headed back to the White House, the Crimson Tide won in overtime in a dramatic finish, 26-23. It was the perfect ending to a perfect night. 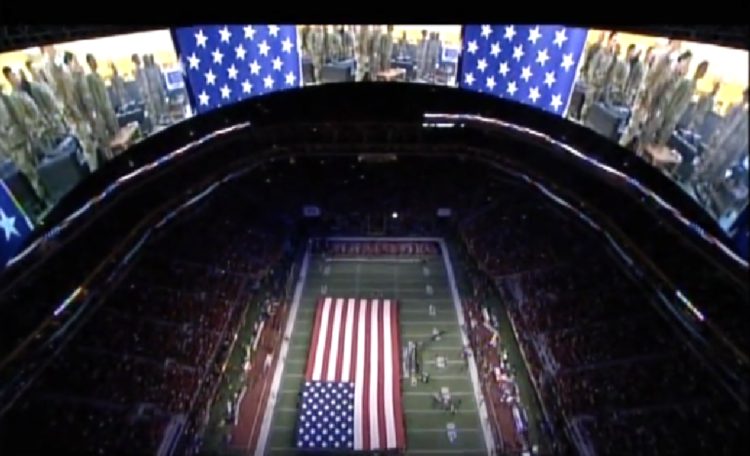 But the event was not without protesters. Trump’s motorcade passed a few dozen idiots on the way to the arena. The racists and commies showed up as well. Atlanta’s chapter of the NAACP encouraged attendees to bring white towels to twirl in the air during the game to capture Trump’s attention. “Trump supporters mockingly call the opposition snowflakes, but when we come together we create a mighty storm,” the NAACP Atlanta wrote in a Facebook post Sunday. The organization said Trump “has made a terrible decision and is disrupting [the game] with his presence.” The group Refuse Fascism also held a demonstration outside of the stadiumat the CNN Center. The radicals attending took a knee against Trump.

Trump stated at the annual gathering for the American Farm Bureau just hours earlier that, “There’s plenty of space for people to express their views and to protest, but we love our flag and we love our anthem and we want to keep it that way.” He was once again criticizing elitist, radical athletes who insist on kneeling during the National Anthem and showing their hatred of all things American, especially police officers and the military. That took place in Nashville and Trump was cheered and applauded there as well.

This is President Trump’s second college football game since entering politics, but it’s the first team sports event he’s viewed in person since taking office. He previously attended the annual Army/Navy football game when he was President-elect. He supported both teams and praised them for their “spirit” during a surprise appearance in the announcer’s booth for CBS Sports. It was very moving and patriotic. Although the left and the media roundly criticized President Trump for everything he did and said yesterday, you can’t help but be proud of our President and country at times like this. It was definitely Trump’s moment last night and America loved it.

Fans waiting in the rain for the college football playoff championship game in Atlanta had a mixed reaction to President Trump's motorcade https://t.co/J6APVc0krd[2] pic.twitter.com/X8iWE5aCJ3[3]

The President takes the field at the #CFBPlayoff[5] pic.twitter.com/qD75OCEOLv[6]

Oh, say does that star-spangled banner yet wave
O'er the land of the free and the home of the brave? pic.twitter.com/5U8MDquTJ1[8]