CNN is in FULL meltdown mode[1] over President Trump’s tweets over Joe Scarborough and Mika Brzezinski yesterday. For 13 hours straight they covered it. On and on and on… it became the issue of the day for the fake news network. Trump tweeted yesterday morning calling the Morning Joe hosts “Low I.Q. Crazy Mika” and “Psycho Joe.” Not good, but I will say this again… these two hacks have been attacking the President for months calling him mentally unfit and a thug. Scarborough just did a video making him out to be a greedy, power hungry, sex obsessed monster. I guess Trump had finally had enough.

He should not have stooped to their level. It was not a smart move at all and it certainly wasn’t presidential. It also played into a trap they set for the President and now they are running with this story for all it is worth. Joe and Mika even canceled their vacation so they could go on the air today and nail Trump over and over again. Sick. This has created a whole new rift between the media and Americans and it is widening by the minute. It doesn’t matter that they had it coming, what matters is the PR of this whole snafu.

Just days after being singled out on Twitter by President Trump, CNN centered its coverage around a pair of tweets from the president on Thursday morning, presenting Trump’s personal attacks on MSNBC hosts Mika Brzezinski and Joe Scarborough as the driving issue of the day.

Trump referred to the two hosts as “Low I.Q. Crazy Mika” and “Psycho Joe,” and claimed he refused to hang out with Brzezinski on multiple occasions shortly before New Years Eve because, “she was bleeding badly from a face-lift.” Trump’s tweets followed a “Morning Joe” segment where Brzezinski and Scarborough mocked the size of Trump’s hands[4].

Trump sent out the two tweets out shortly before 9 a.m. For the rest of the day, those tweets dominated CNN’s news coverage.

It didn’t take CNN long to make Trump’s tweets the lead of its website. The site’s banner read: “The President of the US tweeted this,” and featured a picture of Trump’s tweet as the featured image.

CNN’s coverage yesterday started with Republican criticisms of Trump’s tweets[5], along with Brian Stelter’s original story on the tweets describing them as a “shocking assault[6],” editor-at-large Chris Cillizza’s analysis of the tweets[7] — which he described as “bullying” that “crosses a big line,” a Cillizza podcast on Trump’s tweets[8], a story about First Lady Melania Trump’s spokesperson’s reaction[9] to the tweets and a video of a CNN panel debating Trump’s tweets[10]. They had a field day with this mess. And it didn’t help that Republicans came out against Trump… they had little choice but to condemn the crassness of the exchange.

It got even worse from there on out. The whole afternoon turned into a Trump hate-fest at CNN. They dredged up things about women from comments on their looks, to the ‘blood’ thing, to sexual improprieties, etc. All of these stories and more were at one point prominently featured, either as CNN’s lead story or just below it, during CNN’s marathon coverage of the two tweets. A never-ending string of leftists and media hacks paraded across CNN demanding apologies from the President. They even went the child route, asking how they should explain Trump’s behavior to their children. Like that never gets old.

13 freaking hours of this bull crap when North Korea is getting ready to nuke everyone, Illinois is defaulting, we are pounding ISIS into the ground and dozens of other more important stories are playing out. CNN should be ashamed of themselves. But then again, there’s enough shame to go around on this one for everyone.

The tweets were bad, but this seems like a bit of an overreaction by https://t.co/Ri0Erb16tb[11] pic.twitter.com/9AqjkoEeSv[12] 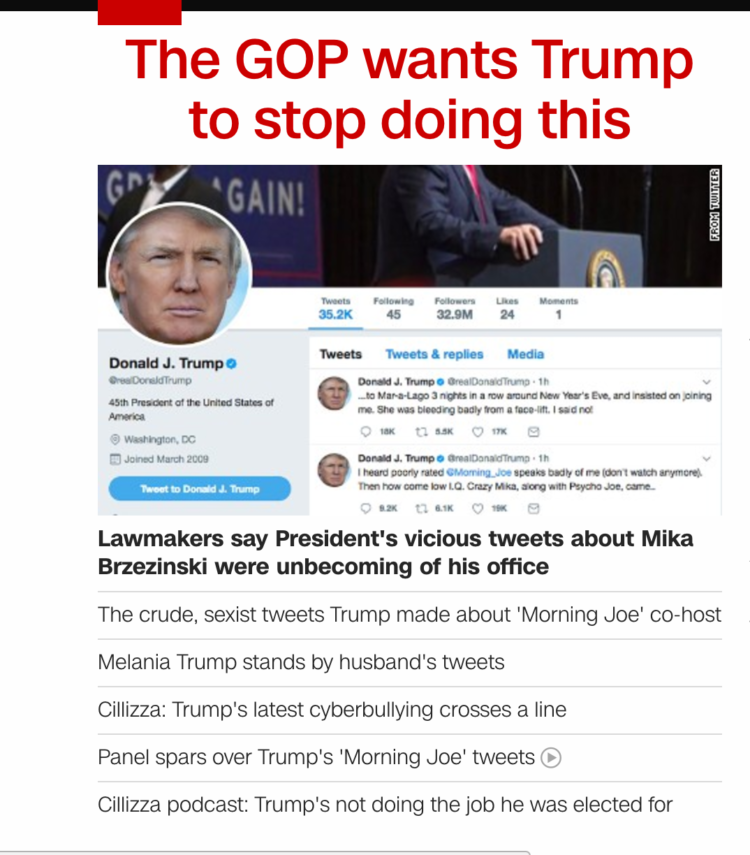 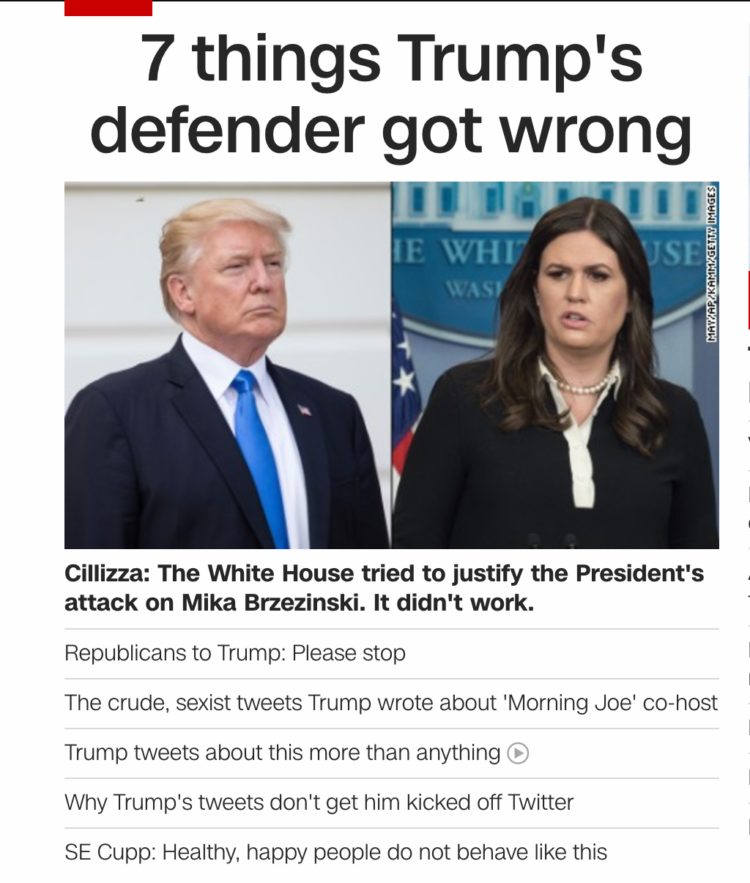