President Trump seems to[1] really think Elizabeth Warren is going to run for the presidency in 2020. For the record, so do I. She’ll be 71, but then again, Trump will be 74. Both are getting up there, so I would hope there will be younger challengers in the ranks… someone who is a true constitutional conservative. But if it is Trump and Warren, he will trounce her. She’s not a friend of the NRA and he made that very clear at this event. Trump also said he won’t forget the NRA and how they have supported him. He’s got their back… they were and are loyal to him.

Warren is a devout Marxist. She may have a law degree and spout economics, but she’s as dumb as a box of rocks and simply deranged. This week she spoke of her hope that Republicans would donate their bodies to science when they die, so she can cut them up to see what makes them tick. The woman is a communist. She believes in total control by big government and she’s also a globalist. She spouts about wealth distribution, but like her Marxist brethren, she’s very wealthy. Share the wealth for thee, but not for me in Warren’s case. She’s a lot like Bernie Sanders without the Muppet charm. 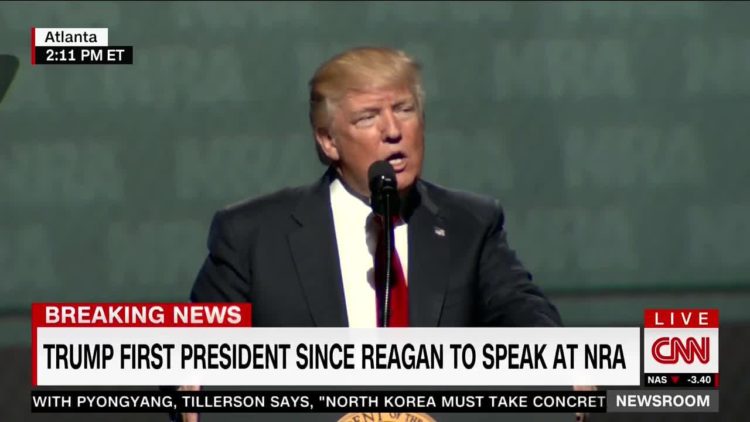 Trump first thanked the NRA attendees in Atlanta for giving him the “earliest” presidential endorsement in the group’s history before noting he wouldn’t be “standing before you today” as president without their support.

“I have a feeling that in the next election you’re going to be swamped with candidates but you’re not going to be wasting your time,” POTUS continued. “You’ll have plenty of those Democrats coming over and you’ll say, no, sir, no thank you.”

“No, ma’am. Perhaps ma’am,” he quickly clarified. “It may be Pocahontas. Remember that.”

Trump is the first President since Reagan to address the NRA. That’s a big deal. The NRA also gave their blessing to Trump as a candidate the earliest in his campaign cycle that they’ve ever endorsed anyone. Frankly, there is no Democrat out there period that could sway the NRA. The Dems are anti-Constitution, anti-freedom and anti-gun rights. They are the reason we have a Second Amendment.

I love it when Trump tears into Pocahontas. She’s such a vile person… she’s detestable. If you have ever listened to this moonbat rant at a Democratic Convention, you know what I mean. She’s nuts and a collectivist. She’s just what the Democrats love and what constitutional conservatives abhor. In John Hawkins’ New book, ‘101 Things All Young Adults Should Know’[3], he teaches in chapter 17 of the book, “If you want to know what a person really believes, watch their actions.” Warren’s are the actions of a radical communist with a taste for power and a pinch of psychosis mixed in.