Behold the massive hilarity of a liberal meltdown and freakout after Donald Trump was elected to be the 45th President of the United States. It is epic. I have never, ever seen anything like what you are about to indulge in. These people are simply unhinged whiners. I had no idea it was this bad out there. Liberals are suicidal over Trump… they literally think the world is going to end. They seriously need to get a grip… but they are liberals, so instead they will crawl off to what they consider a ‘safe space’ and wet themselves. Boo freaking hoo.

One of Trump’s promises is to cut off all funding for this insane climate change nonsense. That caused the commie rag, The Nation, to go ballistic. They said it was the ﻿political equivalent of the asteroid that ended the Cretaceous period. Hopefully, the only thing it will end is the global warming insanity and possibly the EPA. Progressives really should go the way of the dinosaurs for all our sakes. They screeched that whole nations would disappear underneath rising sea levels. Still laughing over that one. 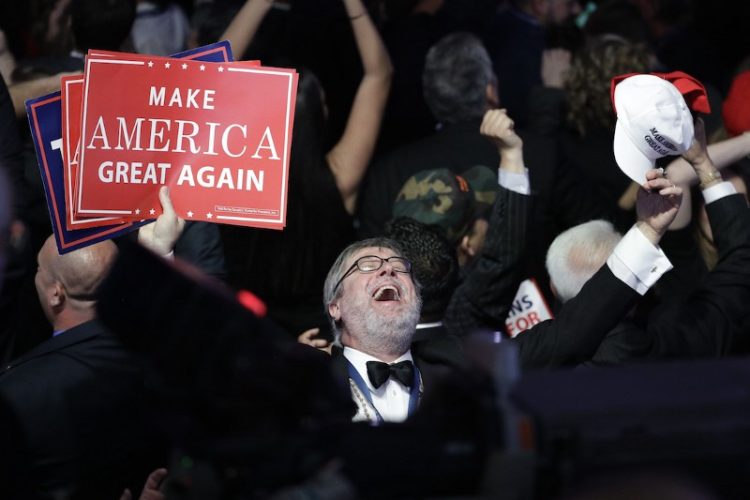 ﻿A presidential term lasts only four years, but in the climate, it lasts for thousands. Carbon dioxide is a stubborn molecule: Once emitted into the air, it hangs around, cycling between the oceans and the atmosphere, some of it for as long as hundreds of thousands of years. It means that today’s energy policies will impact the temperature of our planet far beyond any foreseeable future. It means the election of Donald Trump could be the political equivalent of the asteroid that ended the Cretaceous period.

More from The Nation[3]:

At the precise moment that Donald Trump was giving his acceptance speech, I was in a room packed with a thousand people in Sydney, Australia, listening to Maria Tiimon Chi-Fang, a leading activist from the island state of Kiribati. All day I had been sending e-mails with the subject line “It’s the end of the world.” I suddenly felt embarrassed by the privilege of this hyperbole.

﻿If Trump does what he says and rolls back the (insufficient) climate progress won under Obama, inspiring other nations to do the same, Chi-Fang’s nation and culture will almost surely disappear beneath the waves. Literally, the end of their whole world.

Then you have The Daily Kos. Infamous for Leftist nut jobs… it does not disappoint. The ever popular ‘fascism’ label is liberally applied here… oh, and did I say, “We’re doomed!’? Again, the Left claims we are. Racism will run rampant according to them… have you seen who was in office for eight years? Possibly the most racist president in history. Trump is not a racist, not even close. But Barack Obama, yep. This piece has trans children committing suicide, hate crimes running amok, gays trampled on, Muslims put in camps, climate change destroying the planet and the US led by a dictator. Oh my. At least the rant was complete and laughably ridiculous. I did love the title: WTF Is Wrong With You People? Catchy.

Fascism just got hold of the United States. We are now seeing the worst of the worst elevated to positions of incredible power. Racism has been legitimized and the reports of hate crimes are rolling in. Trans children are committing suicide. Stock prices of private prisons and coal have skyrocketed. Women are months away from truly losing the right to control their own bodies. Marriage equality is under attack. The safety net is about to be destroyed. Hard won progress on climate change is about to go down the toilet. We are about to lose all regulations on the financial industry. Millions are terrified of being rounded up for deportation. Muslims are facing honest to God persecution. We’ve gotten confirmation that the world’s most powerful dictator manipulated our election to get the result he wanted. Our allies in Europe are freaking out. Intelligence from the Middle East indicates that al-Qaeda and ISIS are over the moon with joy.

Salon claims it was all about misogyny and gender. Tres boring. I hate to break it to you Marxist asshats, a lot of women voted FOR Trump. That particular argument doesn’t hold water with the ‘lady bits’ crowd.

From Salon[5] – the headline says it all:

The misogyny apocalypse: Turns out being white and male counts for more than intelligence, grace or decency

It was unimaginable that America would self-destruct rather than elect a female president. But that’s what happened

One of my favorites is the predictable Sarah Palin meltdown by Occupy Democrats. They act as if she is Satan come to earth. They just can’t believe anyone connected to the Tea Party, especially Palin, would be in Trump’s cabinet. The nightmare of ‘drill baby drill’ has them fainting in the aisles. And horror of horrors, she’s also a Christian. Whatever will America do? Probably get more prosperous. The best revenge.

It is with abject horror and disbelief that we must face the prospect of President-elect Donald Trump choosing candidates for his cabinet. Given that his election campaign team was staffed with fascist ideologues and religious extremists, one shudders to think at the incompetency and malignant greed that will define his administration.

This one is kind of spot on. The Democratic Party is a smoking pile of rubble thanks to the likes of Barack Obama and Hillary Clinton. Obama’s legacy is toast and the Left knows it. More gnashing of teeth and pulling of hair. Good times.

If Donald Trump’s win were the Democratic Party’s only problem, the party’s leaders would be justified in affecting a certain amount of complacency. After all, in a year when fundamentals-based models predicted a narrow Republican victory, Clinton actually pulled out a majority of the popular vote. That makes the Democrats from 1992 to 2016 the only political party in American history to win the popular vote in six elections out of seven. It’s actually kind of impressive.

What’s less impressive is that at the sub-presidential level, the Obama years have created a Democratic Party that’s essentially a smoking pile of rubble.

ThinkProgress gets the asshat of the year award. They are attributing Trump’s win to racism. You see, white people are so scared of people of color, they elected a fascist. And once again, America is doomed. They just don’t get it. The election was not about race, it was about freedom. Get over it already.

Let’s be clear: This is scaring white voters. White people believe that they are more often the victims of racism than black people, according to a 2011 new study from researchers at Tufts University’s School of Arts and Sciences and Harvard Business School. The research also found that white voters perceived social progress for people of color to be much swifter than it actually is.

The authors wrote, “These data are the first to demonstrate that not only do whites think more progress has been made toward equality than do blacks, but whites also now believe that this progress is linked to a new inequality — at their expense.”

And here comes the Jim Crow/Nazi comparisons. What do you expect from a site named The Smirking Chimp? The Nazi comparison is the last resort of a low intellect, but here we are and Trump hasn’t even taken office yet. SMH.

From The Smirking Chimp[9]:

In the typical time travel story, an enterprising person from the future goes back to 1922 to assassinate young Hitler, or to 1963 to interrupt Lee Harvey Oswald in the Texas School Book Depository in Dallas.

This time, however, the smarter denizens of the future world didn’t save us from the horrors of the present.

Instead, Donald Trump somehow got control of the time machine and used it for the opposite purpose. He brought in voters from the past who remembered (or misremembered) a more prosperous, more homogenous, more imperially confident America. He also transported in a few denizens of the Jim Crow South and Nazi Germany to dust off their ugly anachronisms and rally the alt-right.

HuffPo claims their party exploded Tuesday night – at least they got that right. Then they whined about the popular vote, which Clinton won[10] by less than 1%. Then they went into the racism thing again. Just lame.

There will be months of finger-pointing and internal reprisals over exactly what Democrats should have done differently. But the shocking thoroughness of the defeat is plain. Donald Trump ― a man who opened his presidential campaign by calling Mexicans “rapists” ― bested Mitt Romney’s share of the Latino vote by 8 percentage points. He performed better among black voters than his 2012 predecessor, and he swept four Rust Belt states that President Barack Obama carried twice ― Pennsylvania, Ohio, Michigan and Wisconsin ― under a harsher economy than we face today. Hillary Clinton won the popular vote, which should matter, but does not.

Liberals are reaping what they have sown for eight years. America is finally waking up from a prolonged nightmare. Now that the Republicans control the Presidency, Senate and House, maybe we can at long last get something done. Donald Trump is our President now… deal with it. Let him stand on his actions. All of America should give the man a chance to prove himself and stop the temper tantrums. Although, I have to say they really are hilarious.