WH Press LOSES IT When Spicer Speaks About ‘Covfefe’ And It’s Meaning! [VIDEO]

Are these people mentally impaired?[1] I simply cannot believe how the press is flipping out over a presidential typo. “Cofveve” has taken Twitter and the media by storm. My bet was that he meant to type ‘coverage’, you imbeciles. Listen to how the press goes on about how the White House staff should be concerned that President Trump is staying up too late and why doesn’t anyone watch him… like he’s senile. It’s insulting and moronic. Trump can run circles around any of these asshats and it is driving them nuts.

Sean Spicer[2] was clearly poking the media badger when he told them that a “a small group of people” knew exactly what Trump meant. He’s yanking their chain and playing them for the obvious fools that they are. The left is making never-ending fun of a typo as if none of them have ever made one. What hypocrites. In fact, this has done nothing but give Trump more publicity. I think he should keep it up. It humanizes him to the rest of America by the way… he’s just like us. Which of course, the media cannot relate to at all. 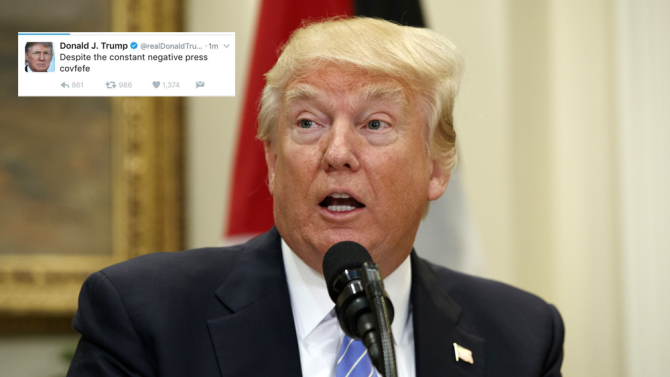 The meaning of President Trump’s viral “cofveve” tweet was apparent to “a small group of people,” White House Press Secretary Sean Spicer said on Wednesday, setting off a brief tumult from the assembled press.

Trump’s midnight tweet Wednesday that read “Despite the constant negative press covfefe,” went viral and became the subject[4] of much derision and speculation as to what exactly that word meant.

The tweet wasn’t deleted until early Wednesday morning. During a short press briefing on Wednesday, Spicer took a question on the matter.

“Do you think people should be concerned that the president posted somewhat of an incoherent tweet last night, and that it then stayed up for hours?” a reporter asked.

“Why did it stay up so long? Is no one watching this?” the reporter asked.

“No, I think the president and a small group of people know exactly what he meant,” Spicer said.

There was an outbreak of crosstalk at that response; one reporter could be heard repeatedly asking, “What is covfefe?”

We may never know.

Trump himself seemed to joke[9] about the incident in a later tweet on Wednesday.

Who can figure out the true meaning of "covfefe" ??? Enjoy!

Trump is also tweaking the media by joking about the meaning of ‘covfefe’. No one will ever know what it means, because it has no meaning. It was simply a typo and the media and the left tried to turn it into a big deal. How sad… they have nothing that will stick to Trump, so they try and latch onto his grammar. Want proof? Look no further than the unhinged New York Times[11]: “And on the 132nd day, just after midnight, President Trump had at last delivered the nation to something approaching unity — in bewilderment, if nothing else. The state of our union was … covfefe.” You guys are just beyond pathetic.

Spicer’s refusal to admit Trump made a mistake prompted laughter from members of the media at the White House. But really… the laugh is on all of them for being so gullible and so easily manipulated. That’s the state of the press for you. #covfefe