WHOA! Toyota Stock Gets HIT HARD After What Trump Said About Japanese Automaker

I’m severely torn[1] over President-elect Trump threatening companies into bringing back plants and jobs to the US. On the one hand, I want that to happen and I can’t help but go… YES!, every time he does this. But the constitutional side of me gets the willies. I abhor protectionism and I have always embraced open market capitalism. There is no denying what Trump does and says however, gets results. Look at the stock market for instance. All he has to do is speak out against or reprimand a company and their stocks tank. Toyota found that out the hard way this week.

Toyota announced in September they were building a plant in Baja, Mexico to produce cars that would be sold in the US. Trump is telling them to move the plant to the US if they are going to sell cars here, or face a HUGE border tax. That’s called a tariff and before celebrating, please realize that a tax like that would be passed onto Americans. And also remember that tariffs are what led to the Great Depression. I’m not saying they may not be necessary in some cases, but be careful how you dance with this beast. It has teeth. 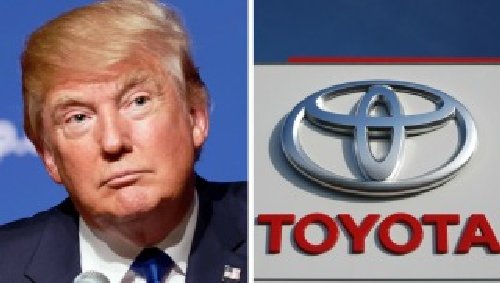 Although Toyota sought to stem the damage from President-elect Donald Trump’s Thursday tweet denouncing[3] the construction of a new plant in Mexico, the Japanese automaker suffered a setback on Wall Street.

Trump posted Thursday that Toyota would pay a hefty “border tax” if it didn’t build the plant in the United States.

Back in September, Toyota[5] announced that it would spend $150 million at the Baja plant to boost output of its Tacoma pickup truck. The company has also said it seeks to invest $1 billion in a new Corolla plant[6] at Guanajuato that would produce 200,000 vehicles per year for sales throughout North America. The plant would employ 2,000 people. 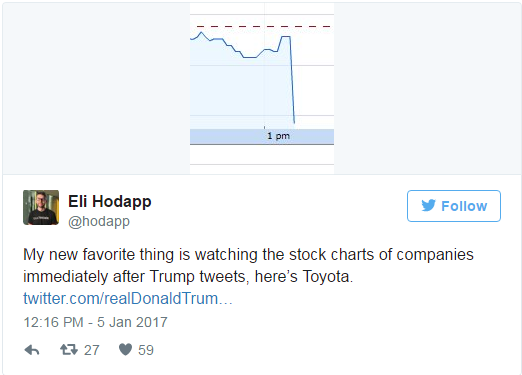 If Trump eliminates regulations and severely reduces corporate taxes the way he has proposed, then I don’t see why Toyota wouldn’t comply. Unless of course slave labor is just too attractive to the Japanese company. Their stock dropped $1.2 billion in value over Trump’s comments. That’s power right there. Now, Toyota is not American, but if they want to play in our sandbox, they are going to have to deal with Trump and his rules. Protectionist or not, this is probably how it is going to go down.

Experts expect the stock price will rebound over time, as happened before to Boeing when Trump tweeted criticism over the cost of the new Air Force One. But there’s no guarantee of that and anything goes these days in the market. Toyota insists that their plant will not hurt employment in the US, but Trump does not see it that way and frankly, neither do millions of Americans. If you are going to build cars to sell to us, do it on our soil and with our workers.

“Trump’s attack tweets against different companies may seem pretty random, but look closer. When he calls out Carrier, Ford, GM, Lockheed-Martin, Boeing, etc., all of the companies he’s targeting have something in common: They’re either unionized companies or in generally unionized industries,” wrote Jake Novak on CNBC, who said Trump’s “protectionist and border security message, which became evident right from the first day he announced his campaign, clearly spoke to union rank-and-file members across the country.” That’s right… Trump is fighting for the common man, the working man and many times, that is a union man.

Agree or disagree, we have never seen a President like Donald J. Trump and he’s going to shake everything up. I suggest Toyota consider their next moves and options carefully. Don’t choose poorly. 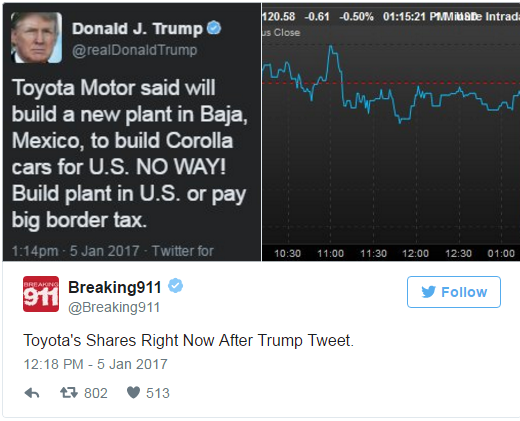 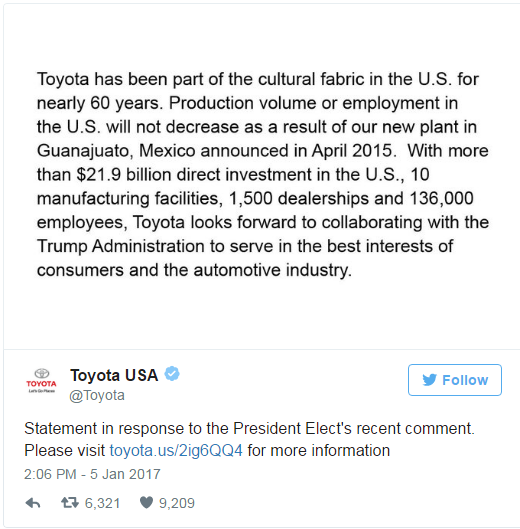