Nevada has become the fifth state to legalize recreational marijuana and people are lining up to visit one of the 40 dispensaries licensed to sell.

One estimate put the crowd between 200 and 500 people, all of whom were eager to get their hands on the legal version of what I imagine they’ve been smoking for a while. 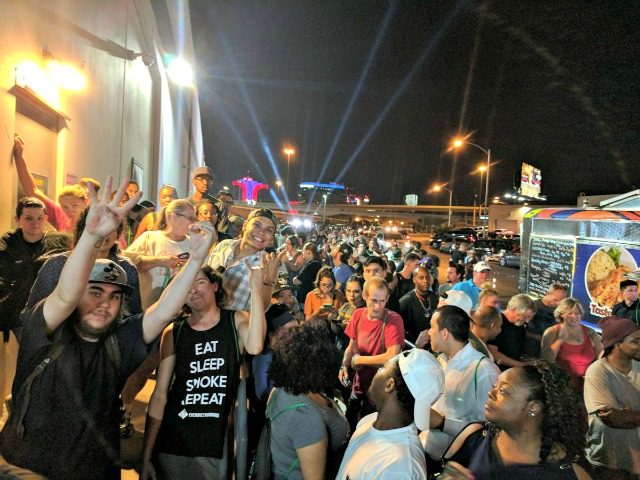 Colton Lochhead is a reporter for the Las Vegas Review Journal and covered the grand opening of the pot shops.

Theres a ton of people. Hearing 200-500 in line at several dispensaries across the valley tonight. Q is, can they get em all in by 3 am?

Back at it again, and so are these folks at The Source marijuana dispensary on W. Sahara. About 100 more waiting in line outside pic.twitter.com/5a13mRlCxK[3]

More scenes from last night's midnight marijuana sales kick off. Hundreds upon hundreds were lined up at Reef near the Strip last night pic.twitter.com/Hk8uxuZi9S[5]

The lines for these new dispensaries reached around the block, according to Breitbart[7]:

Nevada’s residents voted to legalize recreational marijuana back in November, around the same time California and Massachusetts also voted[8] to make pot legal for recreational use.

This means that more states are finally engaging in the promises of the 10th Amendment. Regardless of my opinions on marijuana, legal or otherwise, the people are deciding whether they want to engage in behaviors regardless of the opinions of the federal government.

ABC News[9] said that many of the customers were enticed by free pot giveaways, because what’s better than legal weed? FREE legal weed!

State law allows anyone 21 years of age and older to buy up to an ounce of cannabis, which can only be used in private homes. Marijuana is still illegal to use in public places — such as casinos, restaurants, bars, concert halls, and parks — and those who violate the law face up to $600 in fines, the Associated Press reported.

Do you live in a state with legal recreational marijuana? Do you support it?

This is one of those matters with strong opinions on both sides. One side thinks that drugs are bad and nobody should be legally allowed to ingest them and the other wants to legalize weed not because they care about state’s rights, but because they want an excuse to get high.