It seems like a foolish move by Volkswagen for allowing the United Auto Workers (UAW) to organize its American plants. Not only did the UAW screw Volkswagen in the past, but even now the union admits that it is raising union dues solely to replenish its strike fund so unionistas can walk out. It’s like Volkswagen is buying its own rope for its execution.

Or, as Steve Moore of The Wall Street Journal says, “it’s like inserting a cancer cell into a body.”

That is how Journal editorial board member Moore characterized[1] the act of allowing the UAW to organize Volkswagen’s American auto plants. “That one cancer cell is going to multiply and kill the body. It’s a disruptive influence,” he continued.

Worse, the UAW wants to raise dues for members for the expressed reason of filling strike fund coffers, this according to[2] UAW Boss Bob King.

So, if Volkswagen gives in to the UAW’s demands it will only be helping the union to walk out at the earliest opportunity.

The sad thing about the possibility that Volkswagen will willingly allow the UAW into its plants is that the German automaker’s previous American manufacturing presence was ruined by unions back in the 1970s.

Back then Volkswagen opened a plant in Pennsylvania but a rash of unauthorized union walkouts crushed the carmaker’s nascent US auto plants. One would think that Volkswagen wouldn’t be so stupid as to allow the UAW to cost it so many millions and destroy its business again.

In just ten years the UAW destroyed the Pennsylvania plant and sent Volkswagen packing to Mexico taking the jobs with it. In fact, the giant manufacturing facilities that Volkswagen built in Pennsylvania are still empty to this day. That is the devastation of unionism.

So, when Volkswagen opened its non-union plant in Chattanooga, Tennessee, it seemed that the company had learned its lesson. But now there are some signs that the company is allowing the UAW to once again descend like a plague on its facilities.

If workers in Volkswagen’s Tennessee plant are smart they will tell the union to take a hike. After all voting yes on the UAW is voting to end your job. 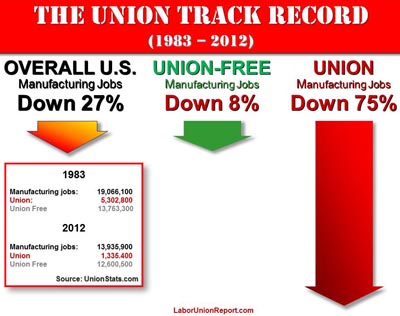