Doubling Down On Operation Choke Point 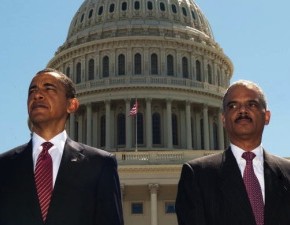 The sheer evil brilliance of Obama’s minions never ceases to amaze me. They are tenacious in their efforts to find ways to circumvent the Constitution and our laws – they simply never give up. There is no better example of this currently than Operation Choke Point[2]. They were caught in 2013 targeting legal industries they did not approve of by bullying banks and other financial institutions into cutting off funds to those whose activities were not ‘acceptable.’ Specifically, the gun industry[3]:

Last year the Department of Justice partnered with the FDIC and the Federal Trade Commission to put a whole host of industries (and their customers) on a “high-risk” list and urged banks to pay close attention to those industries as part of Operation Choke Point.

The Federal Deposit Insurance Corporation (FDIC), at the behest of Barack Obama, has declared that gun stores are “high risk” businesses. “High risk” businesses have been, up until now, a small category of supposedly disreputable businesses, which have included pornographers, sellers of drug paraphernalia, and payday lenders.

The second step in the process is Eric Holder’s Justice Department’s “Operation Choke Point.” And its function is specifically to choke off any credit or credit card processing for businesses (now including gun owners) who fall in the “high risk” category.

There has been a great deal of push back on this targeting and persecution of legitimate businesses by the Obama Administration. Conservative financiers have stepped forward to fill the breach. Undaunted and undeterred, if Obama and Co. can’t get to Conservatives through the law or the Constitution, they then turn to cutting off funding. If that doesn’t work, they turn to government agencies and regulation. If that doesn’t work, there is always Obama’s pen and paper. And so it goes until they accomplish their destructive goals.

Rand Paul has filed Amendment 3292 to H.R. 4660[5], which would put a hold on Eric Holder’s “Operation Choke Point.” It was added to the Science Justice Commerce Appropriations bill. However, I would wager even if slows them down, it won’t stop the Progressive/Marxists who are determined to rewrite the Second Amendment and get the guns. They are like demonic ants who swarm and single-mindedly pursue their desired outcome for the collective.

Right on cue, instead of backing up on their fascist Operation Choke Point agenda, the Left is doubling down with help of the opaque Consumer Financial Protection Bureau. Under the auspices of Dodd-Frank last week, the CFPB passed a rule that was not publicized and was noticed even less. But, boy… it’s a whopper[6].

The rule gives the agency unprecedented power to shut down any business, no matter what the reason, at any time it wishes, through a cease-and-desist order. That’s right… no due process, no notice, no recourse… This rule literally puts any business under the thumb and at the whim of the CFPB. Once shut down, the business can’t go back into operation until they get the blessing of the government or a court ruling in their favor. By the time that happens, they’ll go under – a business could and would spend years in the judicial system. Stall and delay until death do us part.

In a notice published in today’s Federal Register, the CFPB has announced that it has adopted its interim final rule on temporary cease-and-desist orders (C&Ds) without change. The final rule takes effect on July 18, 2014.

The CFPB is authorized to issue temporary C&Ds under Section 1053(c) of Dodd-Frank. That provision authorizes a temporary C&D as an adjunct to a cease-and-desist proceeding brought under Section 1053 against a covered person or service provider. A temporary C&D is effective immediately upon service and remains in effect unless modified or terminated administratively by the CFPB or set aside on judicial review.

This follows Operation Choke Point and is an addendum to those actions. From the United States Consumer Coalition comes a stark warning to businesses and what this could mean for them:

“This unprecedented rule created by the CFPB grants the agency unilateral authority to literally shut down any business overnight. It is a doubling down of Operation Choke Point (OCP), the Administration’s program to target lawful industries by intimidating banks from doing business with them. This rule allows the CFPB to immediately issue a cease-and-desist order, which terminates all business practices – and a hearing doesn’t have to be granted for 10 days, effectively shutting down businesses for at least 10 days. This is a ‘guilty until proven innocent’ tactic of the Administration that goes against every historical notion of justice under the law in America.”

“The Administration got caught with their illegal intimidation tactics in Operation Choke Point, and now they are taking radical steps to ensure the goals of shutting down these lawful businesses are met. This is just the next step in using unaccountable agencies, with their ever-expanding agency powers, to meet the political goals of the Administration. This is a much more efficient way of shutting down lawful industries than just relying on intimidation. It is also no coincidence that this rule was released the day that CFPB Director Richard Cordray finished testifying at oversight hearings on the Hill.”

“This is a direct attack on every free-market business in America, and every single business should be alarmed. No business should have to operate while questioning daily whether or not they will be the victim of a cease-and-desist order. This will cause uncertainty on Wall Street and uncertainty in the job market, leading to a loss of jobs and devastating the families that rely on them, while irreversibly damaging the economy and threatening consumer choice.”

This is the brazen use of political-style Chicago gangster tactics and a blatant violation of Constitutional rights. The rule can be opposed and overturned through legislation and oversight, but who really believes it will be any time soon?

The document explaining this new rule, can be found here…[8]

This is another power grab using regulation[9]. There is not a business out there that can afford to fight this for long and the government knows it. Get on Obama’s naughty list, get a cease-and-desist order, which is actually a business death certificate. It’s a death panel for small businesses and entrepreneurs if you are of the wrong political stripe. What do you want to bet that among the first casualties of this monstrosity will be gun organizations? Closely followed by Tea Party aligned businesses.

How much more will Americans take before saying enough? This has gone way beyond political differences and annoyance now. Hundreds of millions out there are now thoroughly pissed off – stopping them from feeding their families will make it explosive. Doubling down on Operation Choke Point may just strangle the Republic.