Evolution is Revolution in Congress These Days 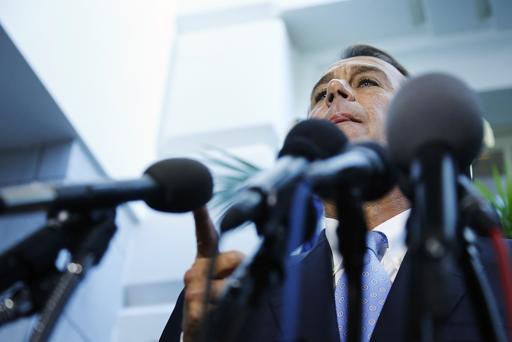 So goes the back and forth on the debt ceiling deadline. It’s boring faux theater. In the end, the Progressive Republicans will give the Progressive Democrats everything they want and will get nothing in return — just as they planned it. This is all for show, nothing for action.

It’s the same thing every time — utterly predictable. The players will all wait till the very last minute to save us from ourselves. Obama will look strong and tough (or so he thinks) and the Republicans will act as if they did everything they could (when in reality, they did squat). You people suck.

A campaign to persuade House Republicans to lift the federal debt limit collapsed in humiliating failure Tuesday, leaving Washington careering toward a critical deadline just two days away, with no clear plan for avoiding a government default.

Senate leaders quickly moved to pick up the pieces, saying they were “optimistic” that they could reach agreement to advance an alternative proposal that would raise the debt limit through Feb. 7 and end a government shutdown, now in its third week.

But it was unclear whether a deal struck by Senate Majority Leader Harry M. Reid (D-Nev.) and Minority Leader Mitch McConnell (R-Ky.) could pass the Senate before the Treasury Department exhausts its borrowing power Thursday.

Meeting that deadline would be impossible if Sen. Ted Cruz (R-Tex.) or other conservative hard-liners chose to throw up roadblocks, Democrats said. Republican leaders were leaning on Cruz and his allies to avoid unnecessary delays.

“The clock is ticking,” said Sen. John Thune (R-S.D.), the No. 3 Republican in the Senate. “Given the consequence of what we’re talking about here, .â€‰.â€‰. I would hope that we would have genuine interest among all parties in terms of trying to get this done as quickly as possible.”

Any deal would also have to win approval in the House, where Speaker John A. Boehner (R-Ohio) and his leadership team had once again lost all control of their majority. After a long day of trying with increasing desperation to cobble together a debt-limit plan that could win the support of 217 Republicans, Boehner and his top deputies gave up and abruptly canceled a scheduled vote on the measure.

On Tuesday evening, they left the Capitol without further plan or explanation.

“We are done for the night,” a weary Majority Whip Kevin McCarthy (R-Calif.) said as he left a marathon session in Boehner’s office that began as an airing of complaints from rebellious conservatives and soon ballooned into a full-blown emergency session of senior lawmakers and committee chairmen.

And on cue, they blame it on Cruz who is trying desperately to do the right and sane thing. What a bunch of jackwagons on both sides of the aisle. Constitutionally, we can’t go into default. Even if we breach the deadline, the US has funds for a couple of weeks before running out of those funds. We bring in way more than enough to pay the interest on our debts by the way, which is the crux of the default issue. However, if Obama decides to default… well, that is another impeachable story. But, I don’t expect it to go that far. Nope — the Whigs will cave and the death of the old Republican guard will be complete. Long live the Tea Party and a new, invigorated movement is born. A third party borne within the GOP and getting ready to clean house of the Progressive cancer that has long metastasized in the Party of Lincoln.

Meanwhile, the Dems are screaming: Armageddon is upon us[3] – a bunch of Marxist chicken littles who only know how to pontificate and lie their asses off. The Party of Evil. But the Republicans aren’t far behind – call them the Mini-Me of Evil. Witness asshat royale John McCain saying ‘I told you so[4]:’

“It’s very, very serious,” warned Senator John McCain, Republican of Arizona. “Republicans have to understand we have lost this battle, as I predicted weeks ago, that we would not be able to win because we were demanding something that was not achievable.”

Will somebody please retire him to the politico pasture already? I waver between death by boredom and death by stroke with these weasels. But never fear the surrender monkeys are here[5]:

Overall, though, the deal marks a major concession for Republicans, given that the initial fight over the shutdown was started due to demands from conservatives that any government funding bill also gut Obamacare. Under the emerging agreement, Obamacare would escape largely unscathed.

Top Republicans said Tuesday it was time to end what had emerged as a politically disastrous episode for their party.

“The only reason why the Democrats don’t look terrible is we look even worse,” said Sen. Roy Blunt (R-Mo.), a member of Senate GOP leadership.

Reid and McConnell were already close to finalizing an agreement before the leaders were forced to enter a holding pattern while House Speaker John Boehner (R-Ohio) tried to get House Republicans to pass their own plan to raise the debt ceiling and reopen the government. That plan had additional Obamacare concessions and would prohibit Treasury from using the “extraordinary” authority to extend the debt ceiling deadline.

But it failed due to a conservative revolt and opposition from Democrats, marking a major embarrassment for Boehner and forcing the two Senate leaders to restart talks with the Thursday debt ceiling deadline approaching rapidly.

More than ever time is working against Reid and McConnell after the two longtime Senate rivals lost a day of negotiations and Senate floor time thanks to the House’s fruitless effort to devise a bill that could attract the support of the House Republican majority.

“Given tonight’s events, the leaders have decided to work toward a solution that would reopen the government and prevent default. They are optimistic an agreement can be reached,” said Don Stewart, a spokesman for McConnell.

Constitutionally, the Treasury cannot extend the debt ceiling. Just as Constitutionally, Obama cannot side step it. But that won’t stop them if they think it serves their agenda. Over and over[6], they blame it all on Cruz, Lee and the Tea Party:

Quick passage in the Senate is far from assured, particularly a deal well-short of the demands to gut Obamacare sought by conservatives like Sens. Ted Cruz (R-Texas) and Mike Lee (R-Utah). The two senators who led the movement to defund Obamacare as part of a government spending bill did not attend a Republican Conference policy lunch Tuesday and have refused to divulge their plans.

Well, at least a few left have a spine and they will emerge as the new leaders of this country when this is all done and history. To paraphrase an old communist saying, evolution is revolution in the Congress these days. The Tea Party is rising and nothing they do will stop it.