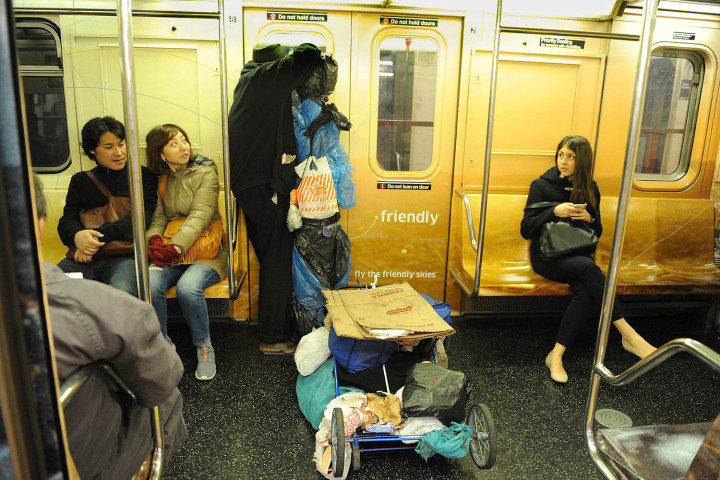 Fear and Loathing Down Under in the City that Never Sleeps

Homeless numbers are skyrocketing in New York (up 13% this year alone) as the Big Apple gets ready to embrace rottenness to its core by overwhelmingly electing an avowed Communist[2] – Bill de Blasio[3]. That should solve the problem – there will be so many homeless, they can just take over the subways entirely. After all, the cops are handling the situation with kid gloves. But if you are an ordinary American, with one spent casing and an unregistered box of ammo in your home, bring on the SWAT team of 30, terrorize the family and put them in their place. This is social justice on steroids from hell and the furthering of Cloward and Piven right on schedule.

For straphangers, it has created an atmosphere of fear.

“I feel threatened, especially taking the train at night,” explained Brooklynite Lortashia Smith, who said she has been followed off trains several times. “The police can definitely do more.”

The NYPD said panhandler/peddler arrests in the subway have increased over the past year, with 409 pinched so far in 2013 versus 395 in 2012. But those numbers pale in comparison to 2011, when it was reported that in a six-month span that year, a whopping 930 panhandlers and peddlers – the two are not separated in the data – were arrested.

“There’s been a drop-off,” acknowledged one police source.

The NYPD refused to provide full-year data for 2011, when cops were busy cracking down on underground quality-of-life issues as part of a Transit Bureau initiative called Operation Moving Target.

At that time, the NYPD explained arrests were up because of a targeted effort by the Transit Bureau to tackle quality-of-life offenses, which can lead to worse crime.

Late Saturday, an NYPD spokesperson said a comparison to 2011 data is not “apples to apples” because the department removed arrests for soliciting and selling MetroCard swipes from the panhandler/peddler category last year.

You see… in Obama’s transformed America, all are equal, except at the wealthy, powerful, elite level. There is no difference between the unwashed and the middle class in Obama’s world and therefore, the homeless, the violent, the insane and the criminal need to be treated as anyone else would be. They are just misunderstood after all and what happens among the riffraff is just political fallout and a minor annoyance.

Straphangers told The Post they’ve noticed an alarming increase in vagrants and beggars.

“Straphangers can’t actually get a seat on the subway because they are taking up the subway space,” said Brooklyn commuter Robert Scarborough. “They don’t wash. They have an aroma.”

Even panhandlers are scared.

“There’s more people down here,” noted Sarah Colon, who said she has been homeless ever since Hurricane Sandy. “The city’s not doing what it’s supposed to be doing. They need to make the shelters better than what they are now.”

Things could get a lot worse.

“I believe this can turn into ‘Mad Max’ down here,” said Maurice Solomon of The Bronx. “It’s a safe haven – it’s warm for them, and people give them food.”

Yes, it will get worse and Mad Max scenarios will emerge more and more as our system of laws break down under Marxist rule. Witness the rise in motorcycle pack incidents[6] back East; some turning very violent.

As New York and DC paint themselves red, America is on an express train to hell. The homeless occupying the New York subways is just one more symptom of a society coming apart at the seams.