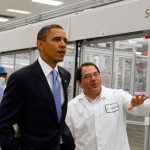 Here are a few of the latest companies to join the growing list of “green” “sustainable energy” failures that have been supported by the current Administration’s deficit “stimulus” spending. All this financing has been done using your tax dollars…well, actually tax dollars to be paid in the future by your grandchildren and great grandchildren to China. Plus interest:

Evergreen Energy-Which has filed for Chapter 7 bankruptcy, saying it’s “impossible to maintain operations” due to funding shortfalls. This announcement comes after the company received $5.3 million in “stimulus” funds.

Amonix Inc.-A manufacturer of solar panels that received $5.9 million from the “stimulus”, will lay off about 200 employees only seven months after opening a factory in Senate Majority Leader Harry Reid’s home State of Nevada.

Beacon Power Corp-Sought bankruptcy protection last year after they received a $43 million loan guarantee from the Department of Energy.

These are all in addition to Solyndra-A solar panel maker that received a $535 million loan guarantee, then famously filed for Chapter 11 protection weeks ago.

This should be quite the political embarrassment for the current White House occupant, who has championed these loans as a way to create “green energy” jobs. When you total up the costs to taxpayers for just these five companies, it comes to $707.7 million. Although it’s a recognizable reality that we now live in an insane world where politicians throw the phrase “trillions of dollars” around like nobody’s business, even a cocaine addict would take a very long time to blow $1 million, much less $707.7 million. And that’s just the tip of the iceberg.

These are some of the myriad of problems found with centrally planned big government intruding into the free market. Not only is the spending inherently wasteful, the fact that these companies were in large part operated by big donors to Democratic political campaign points to the corruption involved when ideologically captive, politically driven politicians make investment decisions based on cronyism. Can you say quid quo pro?

All government energy subsidies should end, leaving energy companies free to compete without government interference. If and when “green” “sustainable energy” becomes the best competitive solution, consumers will reward “green” companies that used private capital to successfully situate themselves in the market by purchasing their products. That’s how it works. That’s what makes America the greatest economic success in human history.