Hotel Obamacare — You can check out any time you like, but you can never leave! 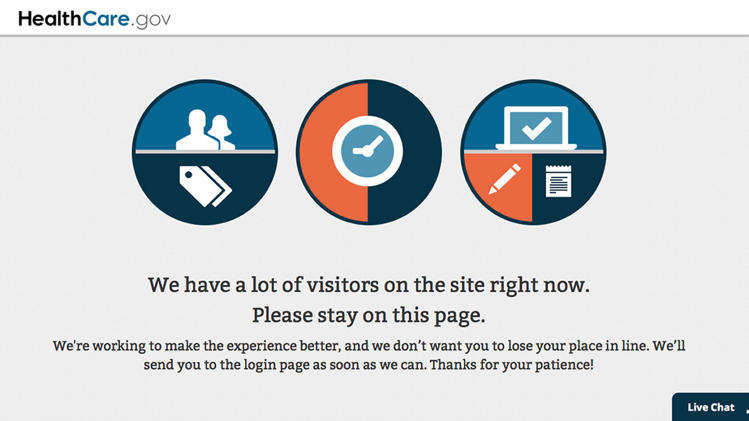 ROTFL… This is rich[2]! Best title yet: We paid $634 million for the Obamacare sites and all we got was this lousy 404[3]. Obama had three years, $634M and countless programmers to simply find out: what do you get when you put garbage in? Garbage out. Not tested[4], spaghetti code, incompetence and people who basically lined their pockets and just didn’t give a flying crap whether it worked or not. In other words, Socialism.

My husband is a Software Engineer. I’m a Management Information Specialist. I guarantee you, that for a fraction of the cost, the site would have worked — even if only in a limited sense. This site cost more than Facebook, Twitter, LinkedIn or Instagram[5]. All of which, by the way, work.

It’s been one full week since the flagship technology portion of the Affordable Care Act (Obamacare) went live. And since that time, the befuddled beast[7] that is Healthcare.gov has shutdown, crapped out, stalled, and mis-loaded so consistently that its track record for failure is challenged only by Congress.

The site itself, which apparently underwent major code renovations over the weekend, still rejects user logins, fails to load drop-down menus and other crucial components for users that successfully gain entrance, and otherwise prevents uninsured Americans in the 36 states it serves from purchasing healthcare at competitive rates — Healthcare.gov’s primary purpose. The site is so busted that, as of a couple days ago, the number of people that successfully purchased healthcare through it was in the “single digits,” according to the Washington Post[8].

The reason for this nationwide headache apparently stems from poorly written code[9], which buckled under the heavy influx of traffic that its engineers and administrators should have seen coming. But the fact that Healthcare.gov can’t do the one job it was built to do isn’t the most infuriating part of this debacle — it’s that we, the taxpayers, seem to have forked up more than $634 million of the federal purse to build the digital equivalent of a rock.

The exact cost to build Healthcare.gov, according to U.S. government records[10], appears to have been $634,320,919, which we paid to a company you probably never heard of: CGI Federal. The company originally won the contract[11] back in 2011, but at that time, the cost was expected to run “up to” $93.7 million — still a chunk of change, but nothing near where it ended up.

Over half a billion for a pet rock. Outstanding. More Cloward and Piven — it was never meant to work. The White House knew the site was not ready[12] — let them eat code. And you can’t blame this on out-dated technology[13]. That’s horse manure.

Even better… The healthcare site is Hotel Obamacare[14] – you can check out any time you like, but you can never leave. Once you get into the site, exiting stage right is not intuitive:

Once you finally make it into HealthCare.gov, it’s not clear how you get out.

For those who’ve busted through glitches on the federal Obamacare insurance website to create an account, there’s no clear, obvious way for consumers to delete the accounts if they choose – at least not in the current incarnation.

A POLITICO reporter used HealthCare.gov’s customer support chat to request that an account be removed, but the support agent said the request would have to be referred to an “advanced” customer service system.

The option to delete account information has become a staple of online services, from Facebook to Amazon. But HealthCare.gov isn’t a private-sector business transaction. And on the federal health insurance portal, people for at least the next few weeks will have to create a basic account even to browse health plan options. That doesn’t require all the personal and financial information that would be added to actually enroll in a health plan or seek government subsidies.

And if you think they EVER get rid of your info., better think again[15]:

But information privacy consultant Bob Gellman said government retention standards likely come into play. And the standards for health record keeping is different from those in other sectors.

“At the highest level of generality, I agree that it’d be nice to delete your record at an appropriate point, but it’s messy and you gotta figure out when and how,” Gellman said.

Gellman said there are legitimate legal reasons why the government would have to retain the record. Consumers do see a privacy notice before creating an account.

“It doesn’t sound sinister to me,” he said. “It sounds bureaucratic and that no one’s thought about that yet.”

Pam Dixon, executive director of the World Privacy Forum, said HealthCare.gov appears to fall under the umbrella of the National Archives and Records Administration, which gives agencies leeway on record-keeping for administrative, legal, audit or other operational purposes. She said many health care providers keep records for seven years but if the exchange policy is to keep them forever that would be “disconcerting for a number of reasons.”

Disconcerting? That’s the understatement of the century. Not only will the records be kept forever (mark my words on that one), the info will be used as a weapon and a deterrent.

Let’s face it. Everything about Obamacare sucks. Everything from their lame site that was written in a ‘before-that-do’ incompetent style, to the crushing taxes and regulations it clobbers us with. Next time we decide to have our government do something that takes brains, talent and money like build a behemoth web site that has all of our lives in its digital sites, just slap us. Save us from ourselves before the whole nation turns into one big 404 occurrence.