Liberals are doing an awful lot of hand-wringing over a move by Texas that could potentially protect the finances of Texans if Obama’s efforts to destroy the American economy continue. A new bill was just signed into state law that will create a gold depository in the state of Texas, untouchable by the federal government. 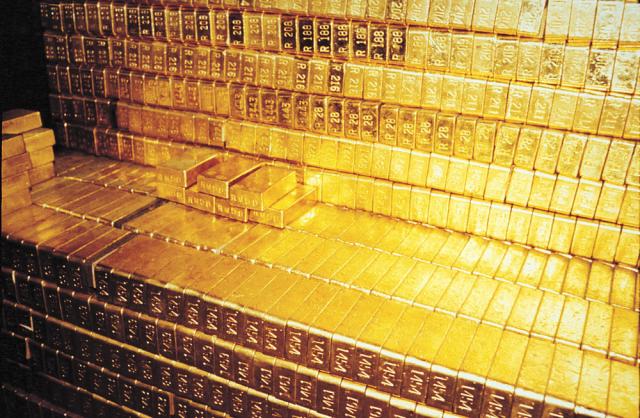 On Friday, Gov. Greg Abbott signed legislation that will create a state-run gold depository in the Lone Star State – one that will attempt to rival those operated by the U.S. government inside Fort Knox and the Federal Reserve Bank of New York’s vault in lower Manhattan. “The Texas Bullion Depository,” Abbott said in a statement, “will become the first state-level facility of its kind in the nation, increasing the security and stability of our gold reserves and keeping taxpayer funds from leaving Texas to pay for fees to store gold in facilities outside our state.” Soon, Abbott’s office said, the state “will repatriate $1 billion of gold bullion from the Federal Reserve in New York to Texas.” In other words, when it comes preparing for the currency collapse and financial armeggedon, Abbott’s office really seems to think Texas is a whole ‘nother country.

And the new depository will not just be a well-guarded warehouse for that bullion. The law Abbott signed calls for the creation of an electronic payments system that will allow gold, silver, platinum, palladium, and rhodium depositors to write checks against their accounts, making the depository into a bank – one that will create a metal-backed money supply intended to challenge the paper currency issued by the Federal Reserve – or “Yankee dollars” as one of the law’s top supporters calls them. And in case the Fed or Obama wants to confiscate Texas’s gold, nice try Fed and Obama! In keeping with this suspicion of the Fed and Washington, the new law also explicitly declares that no “governmental or quasi-governmental authority other than an authority of [Texas]” will be allowed to confiscate or freeze an account inside the depository. Gold that’s entrusted to Texas will stay in Texas.

The depository law is the brainchild of a second-term state representative in the Texas legislature named Giovanni Capriglione, a 42-year-old Republican from Southlake, just northwest of Dallas-Fort Worth International Airport. A private equity manager with an MBA, Capriglione was elected in 2012 after beating an seven-term incumbent with the backing of Tea Party activists. He told the Star-Telegram that when he first announced his interest in establishing a depository in Texas in 2013, he “got so many emails and phone calls from people literally all over the world who said they want to store their gold … in a Texas depository. People have this image of Texas as big and powerful … so for a lot of people, this is exactly where they would want to go with their gold.” On his official Facebook page, Capriglione said he has “ just been overwhelmed with all of the contacts and write-ups and interviews” he’s gotten.

Fed critics herald Capriglione’s bill as a long-awaited and much-needed assault on the government’s printing press. Ryan McMaken at the libertarian Mises Institute (named after Austrian economist Ludwig Von Mises) wrote that “while the Texas depository is a government-owned enterprise, it nevertheless is an improvement since it is a case of decentralization (and arguably nullification)” that will present “alternatives to the Federally-controlled monetary and banking systems.” In what Capriglione – the depository bill’s sponsor – called “an easy to read summary of the specifics” of the law, a Tea Party site described the depository as a “game changer.” The author of the piece, a metals dealer named Franklin Sanders, wrote that “since at least 1991 I have firmly believed that whenever an electronic payments system could be established using silver & gold, it could supplant fiat currencies worldwide within two years at most, less time given a crisis. Now Texas steps forward to make it stick. And if Texas has the nerve to carry though, it will make Texas a center of world finance to rival New York and London better than Switzerland, because it contains 27,695,284 Texans and all but two of ‘em are armed & serious.” (Sanders favors the term “Yankee dollars” to describe paper currency.)

Other gold enthusiasts go further in blowing the secessionist dog whistle. “If the Fed gets too carried away with its digital money printing, then Texas will already have some kind of system to work off of in terms of not using the dollar. I’m not saying it will come to this, but it is symbolic in retaining some liberty, similar to gun ownership in this country. It is not something that will likely be used against a tyrannical government because the symbolism itself keeps tyranny in check,” writes Geoffrey Pike at Wealth Daily. The Tenth Amendment Center, meanwhile, predicted that “while [the bullion depository] won’t nullify the Fed’s monetary monopoly on its own, it represents an important step forward in that direction.”

The depository, then, will insulate Texans from a just-around-the-corner economic and geopolitical catastrophe brought on by paper money and cauterize the seemingly-still-fresh trauma of Franklin Roosevelt’s 1933 executive order making gold coin hoarding illegal during the Great Depression.

… In a telephone interview with TPM, Capriglione said during the “interim period” between legislative sessions before his second term began, he set about re-designing the depository bill to outsource many of those more expensive functions to the private sector. Although the depository is performing the same functions in the new law as it had in the older version of Capriglione’s bill, shifting the execution to private contractors yielded a so-called “fiscal note” in the legislature that calculated an “indeterminate fiscal impact to the state.” Because it’s outsourced rather than run by state employees, it is no longer counted as a concrete expense in the state budget.

Moreover, by privatizing the depository’s operations, Capriglione said he was able to begin recruiting “stakeholders” who “are interested in being a part of the system we’re creating.” Rather than build a Fort Knox-type facility in Texas, Capriglione said “there are commercial vaults not being used or not at full capacity, and I’ve heard from groups willing to start their own depository and IT security companies with underground storage facilities for data centers who can make space available” for gold and other precious metals.

Most importantly, Capriglione found that by offering gold brokers and dealers the chance to become “depository agents” who can accept deposits on the state’s behalf or set up accounts with their own precious metal holdings that can then be sold off and subdivided to would-be depositors, he found a broad network of supporters for the state depository. “These agents will be licensed and bonded,” he said, “they’re middlemen who can, say, deposit $1 million of their own gold into an account and, acting as depository agents, make other accounts by virtually moving the gold.” In other words, by privatizing his would-be Texas Fort Knox and opening the system up to middlemen themselves looking to service the prepper-fueled market in physical gold, Capriglione gained a new legion of well-heeled supporters for his bill. With a newfound squadron of beneficiaries at hand, Capriglione saw his bill approved by both houses of the legislature and signed into law by Gov. Abbott.

The idea of not depending on the federal government is shocking for liberals, so of course they will mock this plan endlessly — to them, more big government is the solution to every problem. But if we see another 1930s-style economic depression in this country, you can bet they’ll be clamoring to get their hands on some of that gold, and by force if necessary.