Last week, Obama killed the Keystone Pipeline[1], costing the US thousands of jobs and once again keeping us from having energy independence. A Canadian Pacific Railway train carrying crude oil derailed Sunday and prompted some evacuations in Wisconsin. It was the second day in a row a freight train derailed in the state. The eastbound CP train derailed about 2 p.m. in Watertown, in the southeastern part of the state. The railroad said at least 10 cars derailed and some were leaking. Oil went everywhere and made a mess. No fires or injuries were reported. But it is an environmental disaster… anytime oil is involved it is. Now, if we had a pipeline there, this would happen a lot less often, but Obama has declared Keystone bad because of the environment and ‘we have to keep some oil in the ground[2].’ Huh? 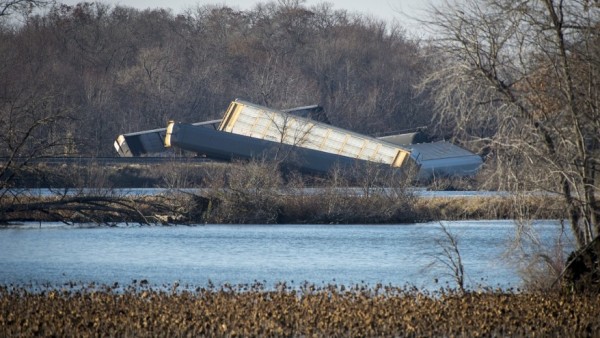 Last week President Obama ruled that the Keystone XL Pipeline, after seven years, is not viable, does not create jobs, is not vital for our energy and national security, and is too dangerous for our environment — since we are the global leader on climate change.

Hmm, I recall the State Department studies saying much to the contrary. Furthermore, don’t we have all kinds of pipelines in the United States? Well, it seems since we have the new lefty running things up north, Monsieur Trudeau, maybe Obama feels he has somewhat of a kindred spirit. But just know, if the tar sands don’t flow through a system southward, they’ll probably go westward and benefit China.

However, how are we supposed to transit crude oil through the United States if the pipeline proposal is sooooo bad? Yep, choo-choo trains, but there’s one problem it seems Obama and the liberal progressives just don’t want to discuss.

As reported[4] by Fox News, “A Canadian Pacific Railway train carrying crude oil derailed Sunday and prompted some evacuations in Wisconsin, the second day in a row a freight train derailed in the state.

“CP takes this incident extremely seriously,” the railroad said in a news release. The company did not say how much oil spilled. Federal investigators and hazardous material specialists are on their way to the scene, the Federal Railroad Administration said in a tweet.

Residents of about 35 homes were asked to evacuate around 4 p.m., said Donna Haugom, director of the Jefferson County Office of Emergency Management. On Saturday, a freight train derailed near Alma in western Wisconsin, spilling thousands of gallons of ethanol. BNSF Railway said crews continued Sunday to transfer ethanol from the derailed cars and get the cars back on the tracks. BNSF said railroad crews stopped the leaks from five tanker cars and placed containment booms along the shoreline. One tanker released an estimated 18,000 gallons of ethanol, and the other four released an estimated 5 to 500 gallons each.”

Do any of you hear the screams and complaints from the environmental progressive left? Nope, neither do I. Just crickets. You see, it’s very simple – just follow the money because it is Obama’s BFF, Warren Buffett, who has lots to profit from because of his control of railroad systems. So why would Obama approve something that’d put a dent in his buddy’s back pocket?

You know, there’s nothing like good ol’ liberal left crony energy capitalism — any of y’all remember Solyndra? Now, let’s play a little game. What if it was a Republican president who was cozy with a big business rich one-percenter railroad kinda fella?

I can bet you the liberal left would be all over supporting the Keystone XL pipeline. After all, the mantra would be good high paying jobs for Americans — meaning unions. But when it’s something that bodes well for a big money supporter to Obama and the left, somehow they are wistfully silent. And if a Republican president was in cahoots with a solar panel company that somehow received big bank of taxpayer dollars and went bankrupt — well, you get my point.

This is yet another example of the liberal left hypocrisy and these days, if there’s one thing that’s transparent it’s just that. The Keystone XL pipeline would have been a very safe means by which the oil could have been transported.

Two train derailments over the weekend and energy products spilled – but it’s not a big deal because it goes against the left’s narrative. And if there was a Keystone XL pipeline, I wouldn’t put it past the environmental terrorists of the left to attack it themselves. Remember the rampage they went on in California in 2003 torching SUVs[5]? They wanted to make a point — I think you call that eco-terrorism.

I give it to my brothers and sisters on the left; they’ve never met a hypocrisy they didn’t embrace.

Total silence from the EPA and Obama on this. Figures. This follows an incident two days before. On Saturday, a freight train derailed near Alma in western Wisconsin, spilling thousands of gallons of ethanol. BNSF Railway said crews continued Sunday to transfer ethanol from the derailed cars and get the cars back on the tracks. The BNSF train derailed at 8:45 a.m. Saturday about two miles north of Alma, a town along the Mississippi River. BNSF said railroad crews stopped the leaks from five tanker cars and placed containment booms along the shoreline. One tanker released an estimated 18,000 gallons of ethanol, and the other four released an estimated 5 to 500 gallons each. No one was hurt there either, unless you count the actual environment. You know who makes a lot of money from all this? Warren Buffett, who is heavily invested in trains and the transport of oil and ethanol. This has more to do with corruption than the environment. But as a bonus, Obama gets to pander to environmental extremists. No pipeline, which would be more sound, safer and cleaner. Instead we have trains that derail and pollute, because environment… lame.