Sometimes you have to wonder what kind of lunatic ultimate objective liberals have in mind. Other times, they tell you straight out. Presenting Dr. Jason Hickel of the London School of Economics:

In an interview for BBC’s Newsnight show on Thursday, Hickel called for “degrowth.” Ignoring energy innovation in fracking, nuclear power, renewables, and battery-based power systems, Hickel claimed that Earth is running out of resources. Rich nations are apparently to blame because we “use three times our fair share of bio-capacity.”

The solution to the evil allegedly inflicted upon the earth by rich nations is to impose an economic system that does not allow nations to be rich. Hickel calls this “reducing our economic footprint.”

Specifically, how do we achieve the goal of reducing our standard of living? Hickel says we can “cut excess consumption by curbing advertising and taxing carbon.”

Censorship and the global warming hoax have their purposes.

Heckel also wants a “basic income,” which will help reduce employment, or as he puts it, “allow us to get rid of unnecessary jobs.”

This basic income that everyone would be paid just for being alive would inevitably shrink along with the deliberate decline in the production of wealth. Hickel wants economic activity in industrialized countries to fall by 4–6% per year.

This would impose a permanent, perpetually worsening depression that would soon lead to mass starvation. Heckel wants to impose a world without freedom or hope.

To call leftists malevolent is like calling water wet. Yet they posture as if they were somehow virtuous. 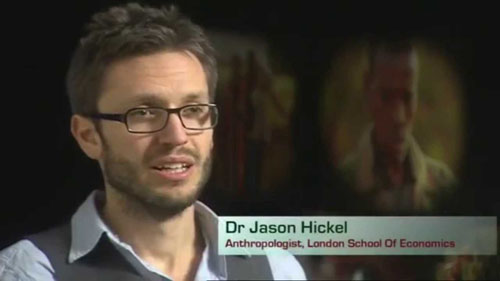