Note to the GOP: Do Not Negotiate With Progressive Thugs

Our Progressive government is very intent on punishing America for not following their edicts. The acolytes who work for the government and the Obama Administration have been given their marching orders[3]:

“It’s a cheap way to deal with the situation,” an angry Park Service ranger in Washington says of the harassment. “We’ve been told to make life as difficult for people as we can. It’s disgusting.”

It is becoming increasingly evident that the Progressive Left (and I might add, the Progressive Right), don’t give a crap about Americans. Witness all the blather from the floor this week on Republicans being extremists, terrorists, Jihadists, anarchists and whatever other slander they can throw our way. They are specifically aiming at Constitutional Conservatives and the Tea Party. Message received loud and clear. Harry Reid was among the loudest asshats using this divisive language. But it’s not just that incendiary throw down that is being bandied about, no… Harry takes it even further[4]:

Harry is at the breaking point, weary from exhausting his thesaurus for synonyms for “arsonist” and “terrorist” and “pillager.” Everyone could see the cracks in his exchange with Dana Bash, a reporter for CNN, who asked why, if he is concerned about children with cancer who are unable to enter clinical trials for new drugs because Mr. Obama shut down the National Institutes of Health, why stifle Republican attempts to grant a little relief?

“If you can help one child who has cancer, why wouldn’t you do it?” the reporter asked.

“Why would we want to do that?” Mr. Reid snapped back. “I have 1,100 people at Nellis Air Force Base that are sitting home. They have a few problems of their own. This is – to have someone of your intelligence to suggest such a thing maybe means you’re irresponsible and reckless.”

How very collectivist of you Harry… Then he tried to walk it back[5] and apologize today for his nasty tone on the Senate floor. Too late… No repentance for the damned, Harry. I don’t care if you are senile – you will have to answer for your evil deeds. The closer you get to that event, you would think you would repent a bit more and, you know, maybe not keep doubling down on evil. Just sayin’. 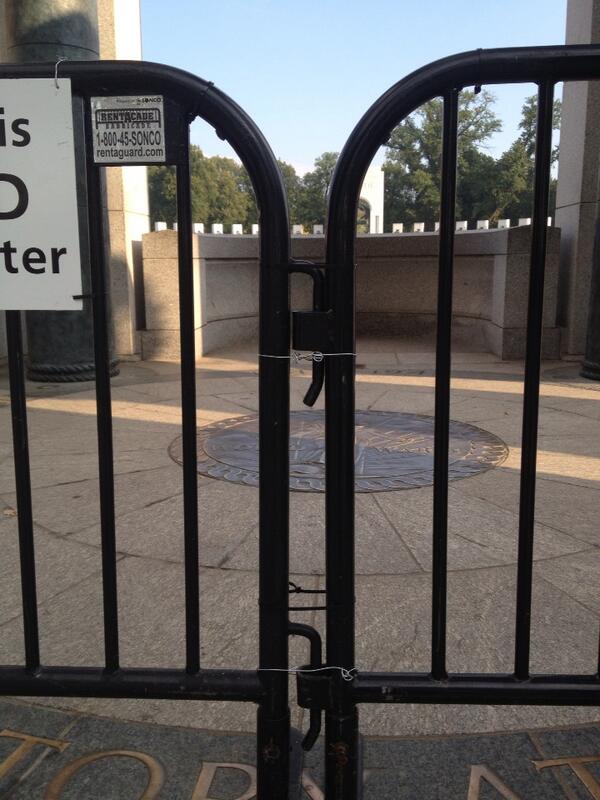 While Obama and his lackeys were busy threatening 80 and 90 year-old WWII Vets on the National Mall and shutting down monuments that had nothing to do with the government, violence arrived on Capitol Hill yesterday. A young hygienist rammed her car into a barrier with her 1 year-old in the car. She was unarmed, but hurt two police officers with the car. They shot her dead. The child, however, is safe. Probably unrelated, but my first thought was that with the McDonald’s workers and the SEIU and Planned Parenthood goons they are paying, was she one of them too? Did it get out of hand? We’ll probably never know. She was probably just mentally disturbed, but who knows any more. But I would bet she was a Liberal.

Meanwhile, the feds have wired shut the WWII Memorial[6]. Let me see… where did I put those wire cutters? That should be fairly easy to rectify. Other businesses such as the Pisgah Inn[7], a private hotel that holds a concession on the Blue Ridge Parkway, has become a national sensation as it defies “intimidation” and a National Park Service order to close its doors. Good for them.

While the government keeps all things Obama enjoys, such as Camp David, open, they are punishing the troops overseas by cutting off[8] NFL and baseball coverage. What a bunch of petulant, evil Marxists.

Americans across our great country seem to be waking up and displaying the courage and tenacity they are known for. Our GOP leaders, however, are another thing entirely. They are getting ready to cave to Obama. They are actually about to snatch defeat from the jaws of victory. Predictable. In a fight over the budget and debt ceiling that dates back to the Founding Fathers[9], our illustrious leaders are intent on collecting their 30 pieces of silver and nailing America in the process. And who is leading these treasonous bastards? Why, John Boehner of course[10]:

WASHINGTON–Senior Republicans in Congress, frustrated over their inability to strike a deal to reopen the government, began shifting from their drive to undercut the 2010 health-care law, which has been the central element of the dispute, toward a broader budget deal.

The new focus comes as Congress is beginning to confront the need to raise the U.S. debt ceiling, which the Treasury said must be done this month in order to pay the nation’s obligations. With federal agencies largely shuttered for a third day, some GOP lawmakers were exploring whether the political stalemate over funding the government could best be resolved by crafting a broader fiscal package that would include an increase in the debt ceiling.

House Speaker John Boehner, (R., Ohio), on Thursday signaled he would follow that course. He told a group of his closest allies over lunch that he doesn’t want to broker a deal to fund federal agencies and reopen the government only to face an immediate negotiation over raising the debt ceiling, participants said. The speaker expressed optimism at the lunch that he might be able to combine the two issues to embark on broader budget negotiations with the White House and Senate Democrats.

What a farce! Three days and Boehner is ready to roll over. He simply made a phony show on all this. It was a distraction to have his Obamacare cake and eat it too. That’ll be with Amnesty icing please…

But the true Conservatives in the Senate and the House are not done yet and are not so easily defeated. They will not knuckle under to the default extortion ploy so quickly. The rest need to grow a backbone and fast. Note to the GOP: do not negotiate with Progressive thugs – on either side of the aisle. Hold the line — don’t negotiate away our freedoms and future. Chris Wallace is right…[11] the White House debt message is ‘bull.’