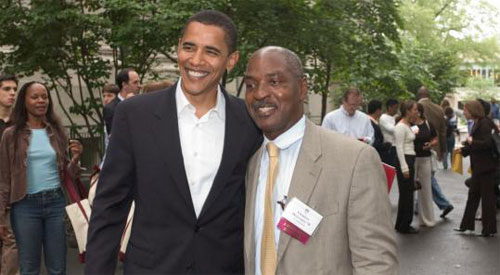 Charles Ogletree was a black panther. He is also the lawyer of Henry Louis Gates, the racist Harvard professor[2] who’s racism caused the beer summit. Ogletree’s daughter Rashida was recently hired into Holder’s Justice Department as a lawyer. Ogletree is still a militant leftist and is still called on by the Obamas for advice.

Obama spent much of the day in seclusion at his rented compound. But in the early evening, the president’s motorcade deposited him at Ogletree’s home in Oak Bluffs for what the White House initially said was a “social event” but then later described as an “informal reception.”

About 100 people attended the gathering at Ogletree’s home in a forested neighborhood of shingled homes. Obama stayed for little more than an hour before returning to his vacation home. The event came a day after Ogletree helped sponsor a Democratic fundraiser at nearby Union Chapel.

Ogletree is an authority on race and politics and became Obama’s mentor when Obama was a student there. Another former Ogletree student is Michelle Obama. The first lady did not accompany her husband to the reception, but senior adviser Valerie Jarrett, who also has a home on the island, joined him.