Obama Ratchets Up Cloward and Piven

It’s looking to me like last weekend’s snafu with the EBT cards[2] wasn’t so much a screw up as a dry run. 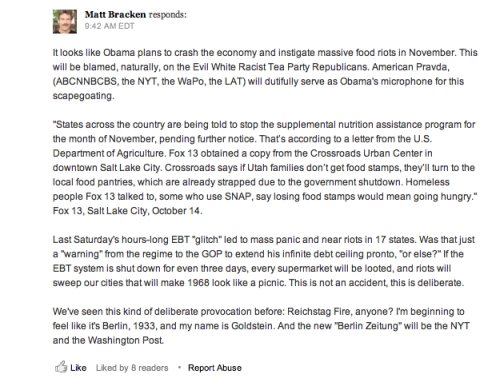 The US Department of Agriculture is now telling states across the country[3] that supplemental nutrition assistance programs (food stamps) will be halted indefinitely until further notice on November 1st if the Republicans don’t cave to Obama and the Marxists. Give in, or people go hungry and the food rioting will begin. Watch it Bam, Bam… your fascist face is showing. Think long and hard about what this says about a President who will do this to his people. Remember the Killing Fields[4] of Cambodia… Remember the Holodomor[5] of Russia.

“This is going to create a huge hardship for the people we serve here in our food pantry,” says Bill Tibbits who is the Associate Director at Crossroads Urban Center.

They posted a letter from the USDA on its Facebook page. It says in part, “in the interest of preserving maximum flexibility, we are directing states to hold their November issuance files and delay transmission to state electronic benefit transfer vendors until further notice.”

“What this means if there’s not a deal, if Congress doesn’t reach a deal to get federal government back up and running, in Utah about 100,000 families won’t get food stamp benefit,” says Tibbits.

In other words, tens of thousands of Utah families may not be able to feed their children come November. 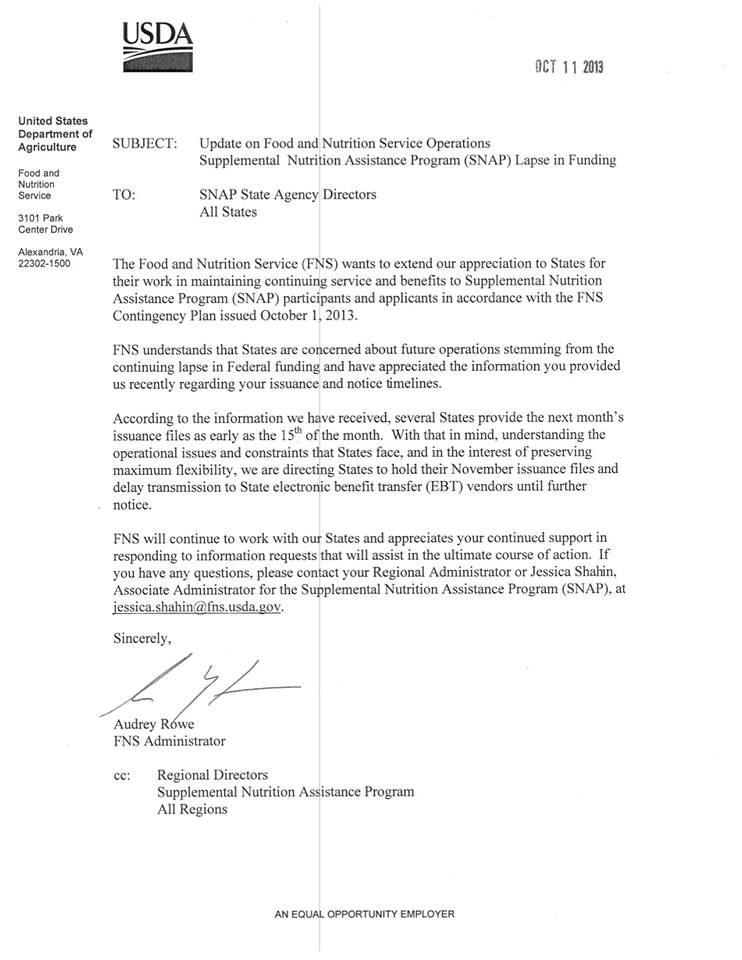 Yep, Obama is pushing to make it as painful as possible unless America acquiesces to his demands and submits. Hunger is a very powerful weapon and dictators love it. But many communities will tell Obama to stuff it and turn to their food banks to feed people. I’m sure our Marxist-in-Chief is noodling on a way to shut that down too. Perhaps he’ll just starve them out – it won’t be long until food pantry shelves turn up empty.

The government is also getting ready to equip grocery store shelves with surveillance[7], did you know that? They say it is to track what you are buying, but it is also to really clamp down on stealing from people who are about to go very hungry. It will be used against Americans, mark my words.

Starting in 2015, high-tech shelves, equipped with built in cameras could appear in grocery stores to watch us and get intelligence.

It’s called retail surveillance and at least one company is moving forward with plans to track what you put in your cart.

The idea is coming from the company that owns mega brands like Chips Ahoy, Nabisco, Ritz, and other snack foods.

The company called Mondelez wants to build a data-base of basic information about grocery store customers like age and sex, so it can better market its products.

In a depression that is gaining in intensity, the economy is getting worse[8]. So, of course, this would be the ideal time to stop food assistance, or so the Progressives think. After all, it serves their political agenda. I am no fan of entitlements, but there are a lot of people out there barely getting by. If you take away their food and you force hunger on their children, things are going to get violent and fast.

Obama is ratcheting up the Cloward and Piven[9] model and heading full steam for a collapse of the system. Get food, get it now. Arm yourselves and have some cash on hand. The American dream is transforming into a nightmare.