[1]Obama has demonstrated zero flexibility on his insistence that higher tax rates for the wealthy kick in on January 1, 2013.

To those familiar with “progressive” modus operandi, it is not surprising that the White House and their “progressive” political allies envision Medicare and other “entitlement” savings happening ten to twenty years from now.

This is what “progressives” call a “balanced approach.”

Reagan, Bush 41 and the American taxpayer have yet to see those promised spending cuts.

In the current “fiscal cliff” negotiations, Republicans who are willing to accept “revenue” increases as a part of a deal with “progressive” Democrats in exchange for promised spending cuts that will happen sometime in the future are stupid, in denial or both.:  How many 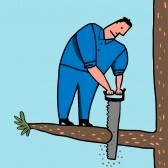 [2]times do Republicans need to make this same mistake before they learn?

“Duh…as a kid I burned my finger every time I stuck it into the fire, but this time that won’t happen…duh…yup…uh huh…duh…ooooh…aaaah…look…something shiny…duh.”

By whatever means, no matter how much “new revenue” Republicans agree to provide, it will never be enough for “progressives”.:  No matter how completely Republican squishes cave to “progressive” demands for more “revenue”, it will work against them in both the short and long term.

The economy will tank and Republican will be blamed by “progressives”, while being seen as unprincipled jellyfish willing to break promises made to their constituents in order to “deal” with those who have no interest in compromise.

They are far more concerned with what they call “fairness.”:  To “progressives”, fairness means confiscating money through taxes from productive people who create wealth and redistributing it to the unproductive.

History shows that tax increases stifle economic growth, which leads to reduced revenue collection.:  Budgetary imbalances grow worse and deficits continue to explode at an increasingly alarming rate.:  By following this path, it is all but guaranteed that the American government will raise the debt ceiling again and experience another credit downgrade. : : U.S. national debt will not go down and GDP growth will become virtually non-existent.

Eventually the federal government will need to find “other revenue” to fund its big spending operation.

[3]With over twenty three million people unable to find work and almost fifty million living on the dole, government will try to invent ways to fund the “progressive” Party’s dependent class.

The retirement savings, IRAs and 401Ks of every American are in “progressive’s” sights.:  Americans believe their 401ks and IRAs are private property, safe from government seizure.

These retirement savings are already heavily controlled by government regulation. : Given the track record of “progressives” it is no stretch to realize that trillions of dollars in private savings are threatened by “progressives” who see them as a way to finance the national debt their big government socialist programs have created.

When Social Security began it was a compulsory savings program administered by the federal government.:  When someone retired, they would get back what they had paid in plus interest. : It only took until 1939 for a “progressive” Democratic Congress to begin using a pay-as-you-go financing method, meaning money currently being paid into the Social Security System is financing current beneficiaries.:  At first it was worked.:  In 1950 sixteen people were paying into the system for each person receiving benefits.:  In the not so distant future there will be two people making payments for each check.

What happened to all the money millions of Americans have had stolen over the course of their lives from their paycheck by government mandate?:  What will happen if the government seizes private savings?

If Republicans ever wish to be taken seriously, they must stand on principle.:  For the future of the American Republic, backing down is not an option.