“progressives” Don’t Care if Americans Suffer at the Pump

There’s widespread consensus in the United States that America needs to become less dependent on foreign oil. America’s growing, ongoing dependence on foreign sources puts her at ever-greater risk in an unstable world. This instability drives the costs higher. 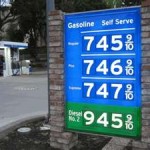 “progressives” who feel an overwhelming compulsion to immediately replace America’s existing carbon economy with a green one couldn’t be happier with the higher costs. The current administration and fellow “progressives” continue to push America towards the green end, come what may. Stiffer regulations on auto makers, stifling EPA regulations on energy producers, refusals by the White House to permit development of domestic resources, quid quo pro government funded paybacks to big “progressive” campaign donors involved in green energy companies litter the landscape.

While such “progressive” actions may eventually “nudge” America towards green energies, they’re hurting the American economy at exactly the wrong time…the very moment when there’s a tepid turn towards possible recovery from a painfully deep recession that’s led to unacceptably high levels of long term unemployment.

America’s public and industrial infrastructures are based on the use of conventional fuels: petroleum, natural gas, coal and nuclear power. While there are moves to convert more public sector automobiles and mass transportation vehicles to natural gas, the overwhelming majority of Americans drive or ride in vehicles that burns gasoline or diesel fuel. Natural gas and heating oil are used in furnaces to heat homes and places of business. Coal, natural gas and nuclear plants generate electricity which powers countless devices, the uses of which are taken for granted every day. Coal, natural gas and petroleum products power American’s industrial complex, the base of her economic engine. Clearly, America’s economy depends very heavily on these existing sources of power. These methods of providing and consuming energy are all deeply ingrained into America’s businesses, manufacturing and home life.

It’s entirely impractical to expect to change the method of powering an entire society of over 300 million people overnight. It’s going to take a lot of time to finish such a task. More time than most people realize. Indeed, far more than is believed by those who continue living in “progressive” fantasyland. First, before making any such transition becomes practical, green energy alternatives must become economically competitive with conventional fuels. Today, they are not.

In the interest of national security and job creation, America should put Americans back to work delivering American energy to Americans. This is the only way the United States economy will be able to afford making whatever “investments” in green energy make economic sense.

Meanwhile, the very people who argue that they’re the ones who care about the little guy will force those little guys to pay increasingly higher gas prices until they’ve submitted to the prescribed “change”. Demonstrably, “progressives” don’t care if Americans suffer at the pump.