No surprise here[1] – the most Progressive/Marxist states in the Union are the ones that take the most money from hard working Americans. Silly me, I thought $100 should buy you $100 worth of goods. Unless of course you get a deal – in which case it should get you more. Not if you live in DC, Hawaii, New York, New Jersey or California. You don’t get equivalency in Vermont or Illinois either. You get fleeced. This map is great for deciding where and where not to live. 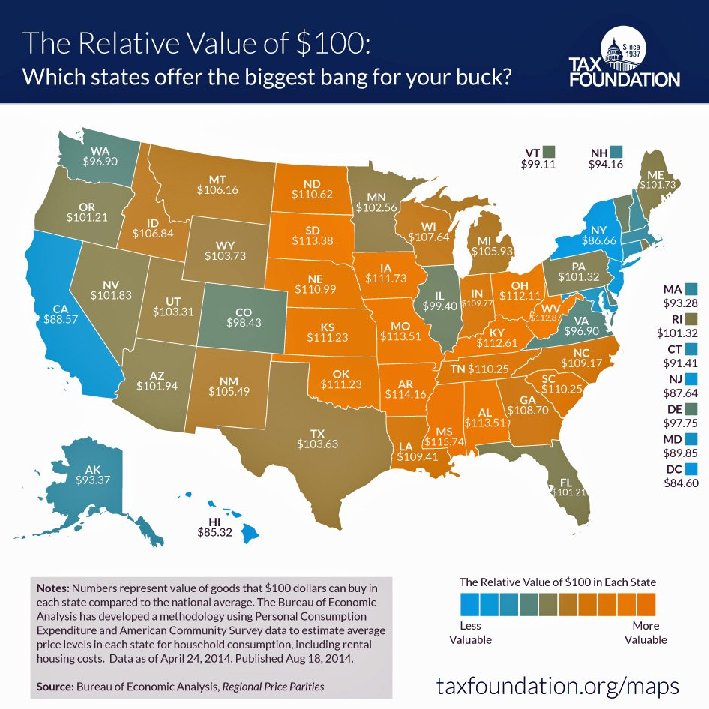 A newly released map from the Tax Foundation[2] shows the relative value of $100 varies, depending on the state in which you’re looking to spend money.

Some states allow you to purchase more due to a lower cost of living, while other states, particularly those on the coasts, give you less purchasing power.

A few states have a value that stays close to the $100 range, such as:

The states where $100 has the most value are:

The places where $100 has the least value are:

As demonstrated above, some states actually get you a bigger bang for your buck, while others can burn a hole in your pocket.

Oddly enough, I wouldn’t choose the states where you get the most bang for your Benjamins. I’d still choose the Northwest. Idaho, Montana, Wyoming and yes, even Nevada. It’s not just how much you save if you live in a place… it’s also quality of life. In my book, nowhere beats the American Redoubt. It’s a pity that lovely states such as California and Hawaii have been so messed up by Liberals. I’ll take a state that gives me more for my money AND freedom, thank you, very much.