Meat is a mainstay in our house[1], so I can tell you firsthand that beef prices have gotten ridiculous. But we haven’t cut down on beef or other meats. We just stopped eating out and we make our meals go a bit further, just like our parents did during the Great Depression. Humans need meat to live and it is a vital component of being healthy. It’s not really that surprising that meat is the number one thing shoplifted. It is a food staple. You can do without milk for a bit if you aren’t an infant… but meat is used in most dishes and veggies only take you so far. Meat thefts are now at an all-time high. Pricing has jumped 30 to 40% under the tender guidance of Obama’s regulators. 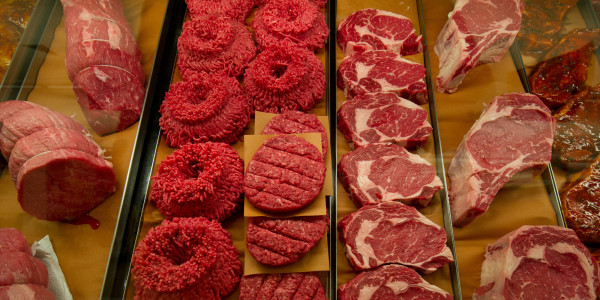 NEW YORK (CBSNewYork) –– Shoplifting is a common crime in the United States, but the number one stolen item in the country may surprise you.

Believe it or not, it’s meat.

“You only have so much money you can spend on groceries, so if the cost of ground beef goes up 30 percent to 40 percent, you have two ways of eating beef — eating less, or in this case, stealing it,” Jamie Schweid, of Schweid & Sons Burgers, said.

According to Schweid, there was an ample supply of cattle when his father started his business in the Meatpacking District in the 1970s — and beef prices were low.

The soaring sirloin prices are a sign of the times, according to Schweid. The popularity of high-protein diets, like the Atkins Diet, increases cattle feed costs.

More recently, the drought in the Midwest has also led to a dramatic rise in beef prices — and more meat thieves hitting the stores.

According to NYPD detective Joe Giacalone, beef burglars get creative, with their tactics routinely caught on surveillance video.

“They’ll put it on an eight-year-old or a six-year-old knowing that the police aren’t going to arrest them,” Giacalone said.

Some stores are even considering putting anti-theft packaging on their meat products — devices similar to sensors put on clothing.

While it may be a sad day when alarms have to be placed on meat–Schweid says things are looking up.

“In about the next year or so, there is going to be more cattle available in this country, so there should be cheaper beef,” Schweid said.

If you eat Paleo or adhere to the Atkins diet, times are tough. But meat producers say in another year the prices should drop. Gee, that’s just about the time that Obama will exit stage left. What a coincidence. I really do hope the prices drop. People should not be going hungry in the richest nation on the planet. Well, we used to be the richest until Marxists got their way with America. Those dirt bags out there stealing and using their children as mules are just beyond redemption though. And it is a sad testament that they are going to have to put anti-theft packaging on meat. America is really scraping the bottom these days.