The Chamber Of Commerce ‘Insane’ War On Conservatism

Allahpundit at Hot Air asked[1], “will 2014 be the year of the RINO?” : Well, the Chamber of Commerce is making sure it will be with their $50 million dollar effort[2] to elect more centrist Republicans (aka liberals who don’t want their taxes raised) : to Congress.

GOP House leaders are taking steps to impose discipline on wavering committee chairmen and tea-party factions. Meanwhile, major donors and advocacy groups, such as the U.S. Chamber of Commerce and American Crossroads, are preparing an aggressive effort to groom and support more centrist Republican candidates for Congress in 2014â€²s midterm elections…

The U.S. Chamber of Commerce early next year plans to roll out an aggressive effort–expected to cost at least $50 million–to support establishment, business-friendly candidates in primaries and the general election, with an aim of trying to win a Republican Senate majority.

“Our No. 1 focus is to make sure, when it comes to the Senate, that we have no loser candidates,” said the business group’s top political strategist, Scott Reed. “That will be our mantra: No fools on our ticket.”

So, let me get this straight; they’re trying to gut the movement that brought the GOP the biggest electoral gains since 1948 in 2010. : Then again, Allahpundit has already been reported[3] on this.

It’s based on false assumptions…when they say, ‘no fools on the ticket,’ the fact of the matter is that there were some centrist candidates who were the establishment favorites who lost in 2012,” Mitchell added. “That’s fine if they want to spend that money, but I think it’s going to be wasted money – and I don’t think it’s going to do any good in the final analysis.”

Chris Chocola, president of the Club for Growth, called the move “misguided in many respects. I’m all for political free speech. People can participate in the political process – and it’s good when they do.

“But the problem with a lot of the groups is that they don’t really care about what the candidates believe,” Chocola added. “They just care what party label they have – and in this case, it’s Republican.”

The Washington-based chamber, established in 1912,: said that it would spend[5]: $50 million supporting centrist Republican candidates who are running for the House of Representatives and the Senate next year.:

All of this stems from the government shutdown, which irked the Chamber of Commerce. : While I consider it the best two weeks of government in all of 2013, the establishment went into a rage against conservatives. : Although, Allahpundit noted that this effort to elect non-crazies could have some problems given that Karl Rove’s group is not going to stand idle and let the Chamber reap all the reward if they’re successful in 2014.

If you want to get centrist Republicans elected and are worried about conservatives turning out en masse to vote for their opponents, having the Chamber wade in is less likely to aggravate the grassroots than having Rove’s group would. But maybe, purely for reasons of ego, that’s unsustainable: No one expects Crossroads to cede the field to lower-profile groups and risk having them take all the credit next year if the GOP romps and takes back the Senate. They’d bleed donors and influence, and might never recover. So Rove and Crossroads will be part of this too, which will have unpredictable effects on primaries in the spring. Will the sheer volume of ad spending swamp righty candidates, or will the backlash be so ferocious among activists that Rove ends up fumbling away a seat or two that establishment types had coveted? Stay tuned. 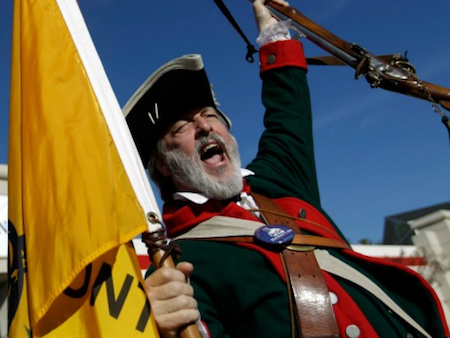