The Weimar Two-Step — Ex-Fed Is Sorry for QE 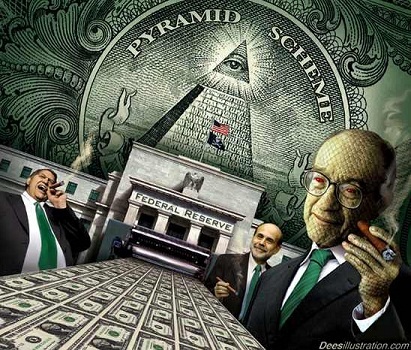 You’re sorry? Really? Well, I guess that makes it all okay that you’ve destroyed the greatest and freest nation and her economy that the earth has ever seen. All forgiven – not. In the end, there will be plenty of tar and feathers to go around. Apology not accepted[2]:

There’s a real question as to whether the massive bond-buying program known as quantitative easing was worth the cost, former Federal Reserve official Andrew Huszar said Tuesday.

“My argument is not that QE was not at all useful,” he said on CNBC’s “Fast Money.”

“I believe that at the time, it was just one more tool that the Fed introduced to try to help the economy,” he said. “My point, ultimately, is the idea that very quickly into QE, it started becoming obvious that it wasn’t working in the way that it was supposed to.”

“I think the real issue is that the Fed has expanded its tool kit so dramatically, and really there are some real questions as to how potentially it unwinds, when it unwinds,” he said. “We saw this past summer there was this announcement of potentially a taper and the markets actually tanked, and after that the Fed backpedaled. What’s going to happen if we go on for months, years longer?”

Huszar apologized for his role in QE in a Wall Street Journal op-ed published Monday.

“I can only say: I’m sorry, America,” he wrote. “The central bank continues to spin QE as a tool for helping Main Street. But I’ve come to recognize the program for what it really is: the greatest backdoor Wall Street bailout of all time.”

Huszar told “Fast Money” that the bond-buying program, which was supposed to increase credit availability to consumers and businesses, didn’t do so.

So, instead you have further lined the pockets of the corrupt and shoved America into the greatest Depression she has ever known. One we will not recover from this time. Well done, asshat. And Bernanke is not absolved here either. He is one of the architects of this massive theft and he knew what he was doing. He was a student of the Great Depression and history, so please do not insult our intelligence by making excuses for him.

The Fed in its greed and corruption, decided to take the Weimar route. Drowning in debt, it revved up the printing presses and ‘digitized’ money. Now it can’t stop – big shocker there. If it does, we turn into Zimbabwe. That’s coming any way… there is no stopping it now, it is just a matter of when. Already, the Marxists are floating inflation excuses. As if we don’t already feel inflation at the store, at the pump, in the damned Obamacare enforced exchanges. There are no bread lines because of the Progressive food stamp program, which they are now curtailing. People are starving behind closed doors, which is okay with the elite as long as they don’t have to look at them or listen to them. What a bunch of evil, elitist money-changers. Remember, quantitative easing worked for the Weimar Republic[3] too – briefly[4]:

There is a reason why every fiat currency in the history of the world has eventually failed. At some point, those issuing fiat currencies always find themselves giving in to the temptation to wildly print more money. Sometimes, the motivation for doing this is good. When an economy is really struggling, those that have been entrusted with the management of that economy can easily fall for the lie that things would be better if people just had “more money”. Today, the Federal Reserve finds itself faced with a scenario that is very similar to what the Weimar Republic was facing nearly 100 years ago. Like the Weimar Republic, the U.S. economy is also struggling and like the Weimar Republic, the U.S. government is absolutely drowning in debt. Unfortunately, the Federal Reserve has decided to adopt the same solution that the Weimar Republic chose. The Federal Reserve is recklessly printing money out of thin air, and in the short-term some positive things have come out of it. But quantitative easing worked for the Weimar Republic for a little while too. At first, more money caused economic activity to increase and unemployment was low. But all of that money printing destroyed faith in German currency and in the German financial system and ultimately Germany experienced an economic meltdown that the world is still talking about today. This is the path thatthe Federal Reserve is taking America down, but most Americans have absolutely no idea what is happening.

It is really easy to start printing money, but it is incredibly hard to stop. Like any addict, the Fed is promising that they can quit at any time, but this month they refused to even start tapering their money printing a little bit. The behavior of the Fed is so shameful that even CNBC is comparing it to a drug addict at this point…

America is now in a money printing death spiral and we are screwed. According to Graham Summers, the Fed has “crossed the Rubicon” and we are now “in the End Game[5]”:

If tapering even $10-15 billion per month from $85 billion month QE programs would damage the economy, then we’re all up you know what creek without a paddle.

Put it this way… here we are, five years after 2008, and the Fed is stating point blank that the economy would absolutely collapse if it spent any less than $85 billion per month. This admission has proven just how long ago we crossed the Rubicon. We’re already in the End Game. Period.

The is the Weimar two-step and somehow, sorry just doesn’t cut it. It will end in an American dark age, hunger, death and perhaps invasion by a foreign power. How do these Marxists sleep at night? Quite comfortably with our money, their power and protection by our enemies — foreign and domestic.