I’m more of a fair tax/flat tax kind of gal, but Trump’s tax plan has merit[1] if you take the time to review it. Before I get into that though, I just have one question… why is Trump having to put forth all these plans and no other candidate on either side of the aisle is being asked to do the same? That’s seems very skewed to me. I also don’t think Trump should be releasing plans this early. Too much time to pick them apart on the trail. After having said that, I like the reduction to four brackets. It’s much cleaner and simpler. Many people will owe no taxes and most of the others will see a drop by about 10% in their tax obligations. I think America would at least breathe a sigh of relief over that development. I know I would. Now, if we can just gut the IRS and hit that pesky reset button. 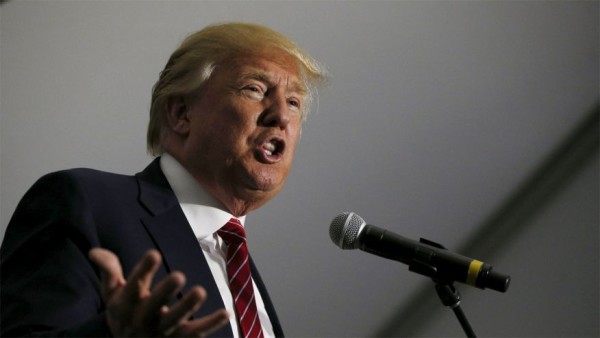 The first priority for the government of the United States should be to provide security for its people. That security includes removing uncertainty and making sure that the economic future of the country is assured through better deals, smarter trade agreements and tax policies that unburden the middle class and unleash the private sector.

My approach to tax policy will do just what needs to be done. For all Americans, the uncertainty and complexity of a tax code written for special interests and the very rich will be removed and a clear future will be available for all. My tax plan has several goals. Let me make it clear that this set of policies takes dead aim at eliminating deductions and loopholes available to special interests and the wealthy, as well as those deductions made redundant or unnecessary by the much-lower rates every person or business will be paying.

In particular, I am proposing ending the current treatment of carried interest for hedge funds and other speculative partnerships that do not grow businesses or create jobs.

The first goal of the plan will be to provide tax relief. If you are a single person making less than $25,000 or married or filing jointly and earning less than $50,000, you will not owe any income tax. This will remove some 75 million households from the income-tax rolls.

Second, the tax code will be simplified. Instead of multiple tax brackets with multiple variations, there will be only four brackets: 0%, 10%, 20% and 25%. This new code eliminates the marriage penalty and the alternative minimum tax while providing the lowest tax rates since before World War II. Further, this plan eliminates the death tax, thus allowing families to keep what has been earned.

The proposed policies will allow the middle class to keep most of their deductions while eliminating many of the deductions for the very rich. With more money in middle-class pockets, consumer spending will increase, college savings will grow and personal debt will decline.

Third, we need to grow the American economy. For the past seven years, the economy has been at a virtual standstill. Growth in the gross domestic product of less than 2% a year is pathetic. We need to spur production, bring home jobs and make it easier to invest in America.

My plan states that any business of any size will pay no more than 15% of its business income in taxes. This low rate will make corporate inversions unnecessary and will make America one of the most competitive markets in the world. This plan will also require companies with capital offshore to bring that money back to the U.S. at a repatriation rate of only 10%. Right now, the money is not being brought back because the tax is so high.

Finally, this plan will not add to our deficits or to the national debt. With disciplined budget management and elimination of waste, fraud and abuse, this plan will allow the nation to balance the budget, boost the economy to record levels, clear the backlog of workers sitting at home and begin the process of reducing the debt. With moderate growth, this plan will be revenue-neutral. As president, I will pursue policies that will ensure huge economic growth and put this country on the road to extraordinary prosperity.

Any candidate can roll out a tax policy, but this one has the economic well-being of the country and its citizens at the forefront. This plan is bold, but it is also cast in reality and common sense. Growing the economy will provide the security we need to make America great again.

Trump didn’t get to be a billionaire by not knowing how to handle money. His plan would create jobs and bring businesses back to the US. Those are things we sorely need. He is calling for taxing the rich more and I cringe at that. They are already carrying the lion’s share of the load, but it could work. Especially since he is getting rid of the death tax and limiting businesses to 15% of their income in taxes. That would help businesses really grow here in the States. I would be willing to give his plan a shot. It would certainly be an improvement over what we have now. I give Donald Trump credit for being one of the greatest businessmen out there. I’m still in this for Ted Cruz, but Donald Trump seems to me like a solid candidate. I just wish he got more of a fair deal himself out there.