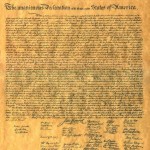 Of late, much has been made about the current administration’s attack on First Amendment Rights. Attacks have been made on religious liberties (see healthcare mandate on contraception in religious affiliated institutions)

While it may be correct to fight unconstitutional actions by this administration through continued pursuit of these specific issues, it might be wiser to focus on the bigger picture.

The list could continue, but you get the idea.

A President whose character is thus marked by acts which may define a Tyrant, is unfit to govern a free people.