US Government “Crapped Away” $125 BILLION in 2010 Via Improper Payments 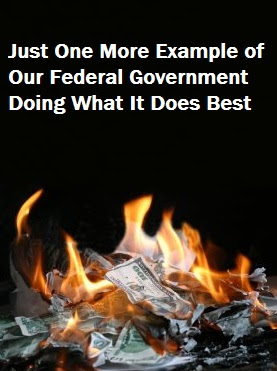 During the fiscal year just ended,:  improper payments made by Uncle Sam (checks sent in error, disbursed to the wrong person, or obtained through fraud):  reached $125 Billion dollars. And here’s the best part, the government is bragging about it. This is from the OMB Director’s Blog[1]:

As part of the President’s Accountable Government Initiative[2], we’ve worked hard to bring down the rate of improper payments, recapture misallocated funds, and meet the President’s goal of reducing improper payments by $50 billion by the end of 2012. Yesterday, federal agencies finished their year-end financial statements, and I’m pleased to report that we have made significant progress on these fronts.

For 2010, the government-wide improper payment rate declined to 5.49 percent, a decrease from the 5.65 percent reported in 2009. This means that we prevented an additional $3.8 billion in improper payments from being made in 2010, and are headed in the right direction as we work to meet the President’s goal.

What your government is telling you, “Yes it’s true, we trashed $125 Billion, but hey, we could have:  have blown almost $4 Billion more. Now that makes me feel much, better how about you?

The government reduced waste by 0.0016 but its still wasting almost 5.5 cents out of every dollar. Putting that in perspective, lets say for second you were making a middle-class level $100,000 dollars per year. Now take $5,490 dollars out of that 100 grand and throw it into a roaring hot campfire. That is the equivalent of what your government is bragging about.

The data show that eight of the 10 programs most responsible for improper payments, including Medicare and Medicaid, reduced their erroneous payments rates last year. Only the Social Security Administration’s[3] Old Age, Survivors and Disability Insurance program, a program for the elderly, and the Labor Department’s[4] unemployment insurance program, saw increases.

And this is a good thing? Why aren’t they screaming bloody murder? The US Government craps away over $100 Billion/Year.:  This isn’t an Obama thing, nor is it a Bush thing, we have been throwing away this money for a long time.

“It is unthinkable that we have come to accept having a bureaucracy that has institutionalized waste, fraud and abuse to the point where $125 billion in improper payments were made last year. The first place we should look to make progress on higher costs, increased debt and a stagnant economy is look inward at how taxpayer dollars are being spent and doing more to ensure that tens of billions of dollars are no longer erroneously paid out.”

No money saved from fraud and abuse? It seems to this observer that there could be plenty turned up if we just tried.

Jeff Dunetz is editor of the Political Blog The Lid[6], a contributor to American Thinker[7], Big Government[8],Big Hollywood[9],Big Journalism[10], and Big Peace[11].