For your heartwarming Christmas gift giving special, after catching a woman trying to steal eggs to feed her family, a compassionate police officer in Alabama brought two truckloads of food the the woman and her family. 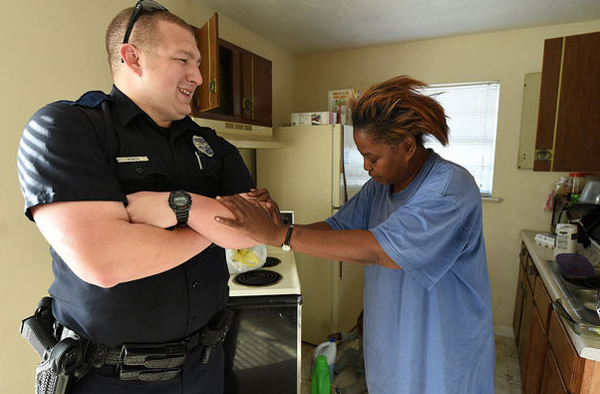 Officer William Stacy caught the woman trying to steal food at a local Dollar General store but instead of arresting her, he decided[1] to try and help her out of her plight.

On Wednesday, Tarrant police delivered two truckloads of groceries to the woman, who on Saturday was caught stealing five eggs from the nearby Dollar General. Instead of arresting Johnson, Tarrant Police Officer William Stacy bought her a carton of eggs and sent her home with the promise to never shoplift again.

That in itself, Johnson said, was a blessing. But those blessings now seem to have taken on a life of their own. Tarrant police said they’ve received calls from across the United States and world since hearing of Johnson’s plight. People have offered food, money and clothing.

It’s been so overwhelming, said Tarrant Police Chief Dennis Reno, he had to bring in a second police dispatcher to handle the volume of calls. Police officials today also set up a fund at People’s First Federal Credit Union on Ford Avenue in Tarrant to benefit the Johnson family.