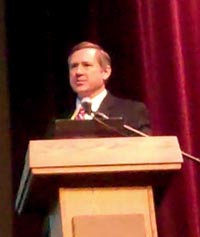 On Dec. 11, 2010, I attended a townhall meeting held in the 14th Congressional District featuring Congressman-elect Randy Hultgren and newly minted Senator Mark Kirk. The event was held in the theater of a local high school in Saint Charles, Illinois.

The afternoon started out with an address by Senator Mark Kirk who already was sworn in for an interim term and will be starting his first full term as senator in January. After Kirk finished his opening remarks, Mr. Hultgren spoke and then there was some time for questions for the audience. 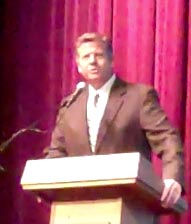 Kirk spoke for a strong defense, he spoke for fiscal responsibility and he spoke against the DREAM Act. For his part, Mr. Hultgren didn’t have much to say past his recently successful campaign talking points. But that is to be expected since he has not yet been to Washington to be involved in the issues in our nation’s capitol. Hultgren won’t take office until Jan. 5. Both men strongly spoke in favor of repealing Obamacare.

I have video of both men’s comments. I took the video with my hand-held Flip cam so it may be a bit shaky here and there. (And on the Kirk video I had to set the camera down for half a minute to turn my phone off as I got a call in the middle of his remarks. I thought I had turned it off, but obviously forgot to do so! So my apologies there.)

Here is the video of the two gentleman’s remarks…

On Kirk’s comments, the only thing not shown was at the beginning when he thanked and recognized all the local politicians in attendance. I cut that out because it does not pertain to the meat of his comments.

The question and answer period (of which I have no video, only audio) was interesting in several instances. In one case a young Hispanic man came to the mic and asked the pair why they wouldn’t support the DREAM Act. Both stood by their rejection of the DREAM Act with Hultgren saying that he thought that our immigration process itself was broken. With legal immigrants taking up to a decade or more waiting to become citizens, Hultgren said that in this day and age we should be able to do better.

Another interesting question was by a woman who wanted to put a tax on every single share of stock and every investment transaction made claiming it would bring in billions in tax receipts. Kirk and Hultgren both said that such an idea would harm our already failing economy and neither would support such an outlandish idea.

These sorts of absurd tax plans are often promulgated by unthinking leftists. They never quite seem to grasp that taxation deters activity and that people don’t just sit around and take massive taxes without reacting. If such a tax on every investment as proposed were to occur, investing and stock trading would take a tumble and all the supposed tax receipts that these nuts dream would so obviously occur simply wouldn’t. Such a tax would depress investment and the stock market and would further hurt our economy. Anyway, both Hultgren and Kirk fully understood this to be true and rejected the woman’s crazy tax idea.

Happily, the event went well with no disruptions. Hultgren and Kirk faced an appreciative and supportive crowd and both men stayed behind for a while shaking hands and speaking to those that stayed for the opportunity.

(Note Congressman Hultgren’s contact info will not work until the Jan. 5 swearing in ceremony is over and he officially takes ofice)