Why the Economy Is Stagnant

Stir together liberal kookiness and authoritarianism and you get a thick, viscous mud called “moonbattery.” The economy has been going nowhere because it is like a truck stuck up to the bumpers in a rising sea of this muck. Bret Stephens gives a few examples of how insane the situation has become:

Did you know that a company that is a contractor or subcontractor with the government must, according to recent Labor Department regulations, establish a goal of having 7% of its workforce be disabled? Did you know that, to achieve this goal, “Contractors must conduct an annual utilization analysis and assessment of problem areas, and establish specific action-oriented programs to address any identified problems.”

The time and effort wasted recruiting disabled employees to placate petty tyrant bureauweenies is one of countless drains on the overall standard of living.

Did you know that the Occupational Safety and Health Administration recently banned blanket policies on post-accident drug testing because they may be discriminatory?

Everything must be forced down to the level of the least responsible “victim” group. Far better for passengers to get killed than for bus drivers of color get in trouble for using drugs on the job.

Did you know that OSHA’s decision to adopt the U.N.’s 2003 Globally Harmonized System of Classification and Labeling of Chemicals required a relabeling and reclassification effort that cost affected companies an estimated $2.1 billion in compliance?

There is no limit to how much of other people’s money they can waste.

Did you know that a driver who makes a delivery within Seattle’s city limits must earn a minimum of $15 an hour, irrespective of whether his company has a branch in the city?

I’m glad I don’t have to work out the logistics on that one.

Did you know that San Francisco’s Fair Chance Ordinance forbids employers from asking about convictions or arrests on a job application?

Yet bureaucrats are less likely than employers to be held liable when employees turn out to be sociopathic maniacs.

Too bad Seattle and San Francisco aren’t granted independence, to see how long they would last as moonbat city-states. Instead, the gangrene that germinates in these leftist loony bins spreads.

The list goes on endlessly. [… R]egulations are experienced every day as a mix of tedium and torment—a drag on profits, time and what used to be the joy of making money in America.

The Mercatus Center at George Mason University recently estimated that regulations have knocked 0.8% off of annual GDP growth since 1980, for a cumulative total of $4 trillion in lost domestic product.

Growth will be a fading memory unless we reject moonbattery and the bureaucratic leeches who impose it. To do that, we need to remember that free enterprise is intrinsically moral and must be defended from encroachment. 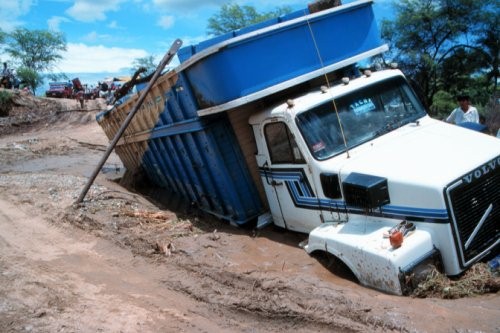 An economy struggling to make headway against the regulatory state.

On tips from Varla and TrojanMan. Cross-posted at Moonbattery.