Officer Eric Ellison is not only an excellent police officer[1], he is a very good man. When Kazzie Portie lost his parents to a drunk driver, Ellison sat with him to break the news. He told Kazzie to ‘walk’ across the stage for his graduation – that his parents would be watching from heaven and he (Ellison) would be there in their stead for Kazzie. Both of them got a standing ovation at the graduation ceremony and there wasn’t a dry eye in the house. This is the same officer that was on the scene with Kazzie’s parents until the EMT’s arrived. Kazzie told BuzzFeed News that seeing Ellison at the end of that stage ‘meant the world to me’. Officer Ellison took a very sad time in Kazzie’s life and filled it with love and honor. 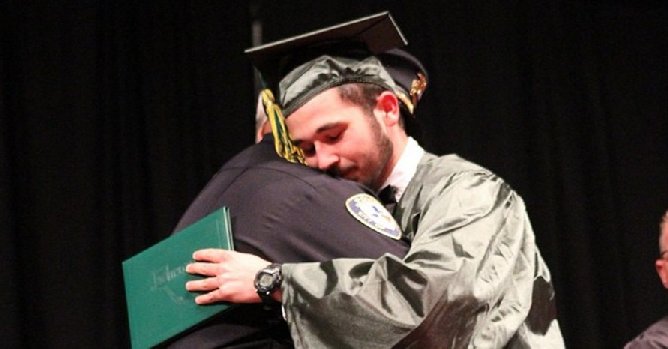 After the parents of high school student Kazzie Portie were killed[2] when their motorcycle was hit by a drunk driver, Ellison was among the first responders on the scene.

When someone was sent to find Riley and Emily Portie’s next of Kin, Ellison was there again, finding their son Kazzie home alone, and delivering the news.

Ellison told Buzzfeed that when he was sitting and talking with Kazzie, the 18-year-old said he was just about to graduate from high school in less than a week, and he wasn’t sure what he was going to do.

Ellison said: “You are going to walk!”

“Your mom and dad will have front row seats looking down from heaven, and I’ll stand in their place. I’ve got your back,” he told WISHTV[3].

So when that day came for Kazzie to graduate, Ellison showed up again. In fact, he was waiting for him the second he walked off the stage.

According to Buzzfeed[4], the entire auditorium gave Ellison and Kazzie a standing ovation.

The story has since gone viral. And Ellison later posted on his Facebook page[5] that he wants the emphasis to be on Kazzie:

“I just want everyone to remember that through this tragedy, this was ALL about Kazzie and his day to shine,” he wrote. “I just did what I would want someone to do if I had left my kids early.”

How do you thank someone who cared enough to be there for you when you have just lost the two people in the world you love the most? How do you ever repay someone who helped hold you up and pushed you to go on to do great things in their memory? In a world where police officers are vilified, stories like this are overlooked and underplayed. But this is how many, many officers are. They are there not only to protect us, they are there when we need them… just showing up and doing the right thing. It’s why they become police officers in the first place. Kazzie’s parents would thank Officer Ellison if they could and I know how proud they must be of Kazzie. As Kazzie’s brother, Blake Henning said, Ellison is a ‘genuine guy’. He was there when he was needed most and that’s real friendship.

Officer who told a teen his parents had died attends graduation in their place: http://t.co/X8pWrlRm18[10] pic.twitter.com/fsBFgejwGO[11]