We have had kids who’ve been suspended for pointing their finger like a gun, for pointing a chicken finger at someone and even a child who was suspended for taking a razor blade away from another student who was cutting himself and turning it in to a teacher.

Well now, we’ve had the police called in because a kid made a poorly constructed digital clock and took it to school. 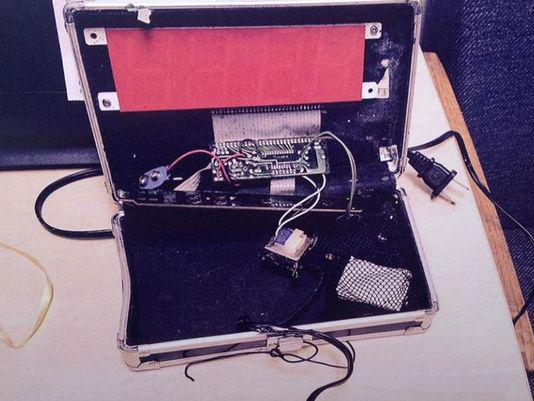 Ahmed Mohamed — who makes his own radios and repairs his own go-kart — hoped to impress his teachers when he brought a homemade clock to MacArthur High on Monday.

Instead, the school phoned police about Ahmed’s circuit-stuffed pencil case.

So the 14-year-old missed the student council meeting and took a trip in handcuffs to juvenile detention. His clock now sits in an evidence room.

….He loved robotics club in middle school and was searching for a similar niche in his first few weeks of high school.

…So he decided to do what he’s always done: He built something.

Ahmed’s clock was hardly his most elaborate creation. He said he threw it together in about 20 minutes before bedtime on Sunday: a circuit board and power supply wired to a digital display, all strapped inside a case with a tiger hologram on the front.

He showed it to his engineering teacher first thing Monday morning and didn’t get quite the reaction he’d hoped for.

“He was like, ‘That’s really nice,’” Ahmed said. “‘I would advise you not to show any other teachers.’”

He kept the clock inside his school bag in English class, but the teacher complained when the alarm beeped in the middle of a lesson. Ahmed brought his invention up to show her afterward.

The teacher kept the clock. When the principal and a police officer pulled Ahmed out of sixth period, he suspected he wouldn’t get it back.

They led Ahmed into a room where four other police officers waited. He said an officer he’d never seen before leaned back in his chair and remarked: “Yup. That’s who I thought it was.”

…Ahmed never claimed his device was anything but a clock, said police spokesman James McLellan. And police have no reason to think it was dangerous. But officers still didn’t believe Ahmed was giving them the whole story.

“We have no information that he claimed it was a bomb,” McLellan said. “He kept maintaining it was a clock, but there was no broader explanation.”

Asked what broader explanation the boy could have given, the spokesman explained:

“It could reasonably be mistaken as a device if left in a bathroom or under a car. The concern was, what was this thing built for? Do we take him into custody?”

This case broke big on social media last night and unsurprisingly, the police have already backed off.

Irving’s police chief announced Wednesday that charges won’t be filed against Ahmed Mohamed, the MacArthur High School freshman arrested Monday after he brought what school officials and police described as a “hoax bomb” on campus.

…“The follow-up investigation revealed the device apparently was a homemade experiment, and there’s no evidence to support the perception he intended to create alarm,” Boyd said, describing the incident as a “naive accident.”

Some people have tried to claim this is all about Islamophobia, but I think that’s an iffy assumption. This kid DID USE BAD JUDGMENT in bringing that clock to school because it does kind of look like a bomb — at least one from the movies. It’s in a suitcase, there are wires, there’s a circuit board….but, and this is a huge but, he didn’t try to “hoax” anybody. Even the police acknowledge he didn’t tell anyone it was a bomb, try to pass it off as a bomb or show it off in an effort to convince people it was a bomb. So, in other words, a fourteen year old kid was taken away in handcuffs for having a perfectly legal, albeit poorly constructed clock that he wanted to show to a teacher. That should not happen.

Because Ahmed is a Muslim and has gotten some attention on social media, people actually care about this case and by the time this is all done, his family will probably end up getting a huge settlement from the school. In the interim, Obama has invited him to the White House and he’s being cheered everywhere for liking science. So, this whole mess will probably end up being the best thing that ever happened to him. Most kids in this situation aren’t that lucky. They get suspended or have the police called over these dumb, no tolerance policies; they get the short end of the stick and there’s nothing they can do about it. We need to start getting better judgment from the people that are running our schools in these cases and if they can’t handle it, then maybe we should accept they need new jobs that don’t involve working with children.