A college education costs a lot more than it used to, but at least students don’t have to work as hard. For example,

A group of students at Arizona State University’s Tempe campus decided to protest Thursday instead of taking a final exam in their human-rights class, a decision endorsed by their instructor.

In fact, Angeles Maldonado, a professor at ASU, offered her Global Politics of Human Rights class an option: Take a test or create a group project.

They opted for the project. The group of about 20 students then decided the best plan would be to protest in front of Hayden Lawn by ASU’s library.

The weather is great this time of year in the Valley of the Sun. Playing outside the library is much more fun than studying for tedious exams like the racist squares within.

Maldonado’s students made signs and stood shoulder to shoulder to make a human wall. Eventually, other ASU bystanders were welcomed and joined in, picking up signs that created the slogan, “Wall Against Hate!”

Let’s hope those participating bystanders are getting academic credit for this scholarly activity.

The group and those who joined them drew attention to a variety of issues, including LGBT rights, women’s rights, Black Lives Matter, immigration, and even the prison system.

Chances are excellent that they managed to express idiotic, pernicious opinions on each and every issue.

Campus police had to intervene twice because the moonbats were preventing other students from getting past.

At least Ms. Maldonado didn’t take her class inside the library to assault people trying to study and yell obscenities at them for being racist, like the Black Lives Matter activists at Dartmouth. 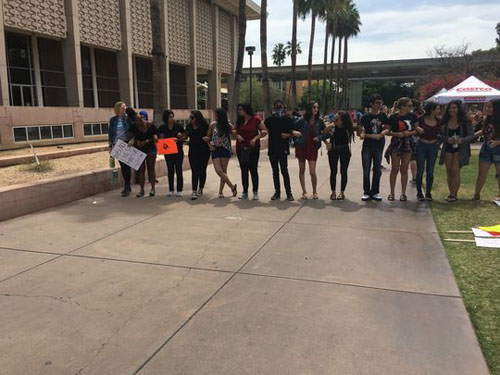 Only racists would want to get into the library anyway.

On a tip from Sufferfortribe. Hat tip: Legal Insurrection. Cross-posted at Moonbattery.