Common Core is an absolute criminal farce[1]. It should be eradicated from school systems nationally. It is meant to make money for corporations such as Microsoft, politically indoctrinate our children and dumb them down to the point of uselessness. The curriculum is intentionally over-complex, makes no sense and is vapid. It does not have the best interests of the students in mind – it has the best interests of mega-corporations, elitists and politicians as its agenda and it is meant to keep children enthralled to the state at all costs. The whole curriculum is rotten to the Common Core. 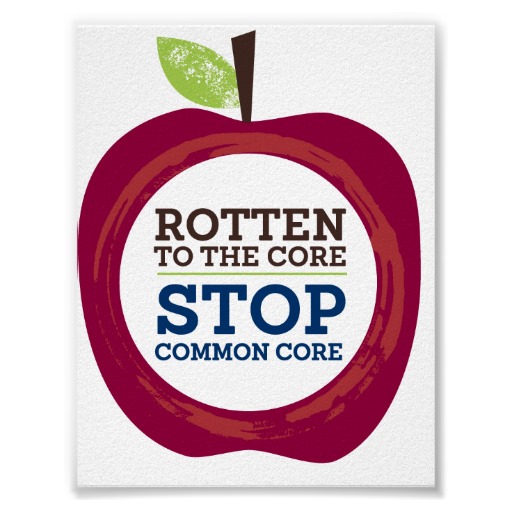 Karen Lamoreaux addressed the Arkansas Board of Education in December 2013 to discuss the negative effects of Common Core on the local students. Mrs. Lamoreaux said that she represented more than 1,100 parents, educators, and taxpayers of Arkansas “who have very serious reservations about the Common Core initiative.” The mother of three children accused the board of falling for the same empty sales pitch that Common Core would be a “set of rigorous, college-ready internationally bench-marked standards that prepare our kids to compete in a global economy.”

Mrs. Lamoreaux instructed the members of the school board to participate in a Common Core math problem by getting their pencils out.

Are you smarter than a Common Core fourth grader? Let’s find out. The problem is: Mr. Yamato’s class has 18 students. If the class counts around by a number and ends with 90, what number did they count by?

After restating the math problem again, Mrs. Lamoreaux asked if anybody on the board knew the answer. One board member answered “five” by dividing 18 into 90. Mrs. Lamoreaux confirmed:

You know why? Because that’s what makes sense, right? That’s the way we were taught to do it in the fourth grade level.

Then she held up a Common Core math lesson that teaches students to solve this problem in a different way.

This, however, is what the Common Core Standards expect our fourth graders to do. If they solve it in those two steps they get it marked wrong. They are expected to draw 18 circles with 90 hashmarks solving this problem in exactly 108 steps. Board members, this is not rigorous. This is not college ready. This is not preparing our children to compete in a global economy.

Mrs. Lamoreaux went on to say that students who were in the upper eightieth percentile or greater in the previous year are now getting C’s, D’s, and F’s on their report cards. With passion in her voice, Mrs. Lamoreaux told the board that she and other parents will fight to change this curriculum that is “dumbing down our kids.”

I encourage you to listen to us when we send you our emails despite the comments that were made by our chairperson here today. Our concerns are not based on hysteria or propaganda. They are based on fact and we are prepared to present those facts. Can you see the trembling in my voice?

She concluded her time:

This is not working. And it’s not what they told you it would be. We will save the privacy concerns and the testing concerns for our legislature. But when it comes to standards, that’s your ball court. And we need you to help us with this because this program is dumbing our children down. Thank you.

In February, Governor Asa Hutchinson announced his plan to create a 16-person Common Core review committee that will take another look at the state standards. Many parents like Karen Lamoreaux are pleased with that decision.

The public school systems under the direction of the Department of Education have thrown out all the tried and true methods of learning and the principles of hard work that we all grew up with. Now, no one fails. They are like lines of little robots that are designed to be assigned to lifelong tasks that serve the state and no one else. It is a tool of slavery and control. Is this what you want for your children? It is one of the reasons I yanked mine out of public school and home schooled them at great expense years ago. The schools are violent and poisonous… and what learning there was to be had is now corrupted and co-opted by Marxists and Progressives. I know many states are fighting it and I hope they succeed. But you should get your children out of the public school system no matter the cost. Their lives and futures depend on it.