Good for Clemson University![1] They found a way to stop the radicals from occupying buildings on campus. They issued trespassing warrants and arrested them. Yahoo! That’s reality for you. A student group called See the Stripes issued a list of seven demands/grievances, then they tried to occupy a building while demanding their list of grievances be met. Among their demands were prosecuting criminally predatory behaviors and defamatory speech on social media – translation: censorship of free speech that doesn’t agree with them. These special little snowflakes were also demanding a safe space for minority students and that Tillman Hall be renamed. They claim it was named after a white supremacist Democrat named Benjamin “Pitchfork Ben” Tillman. The protest started out at Sikes Hall, where some students slept to make their point. 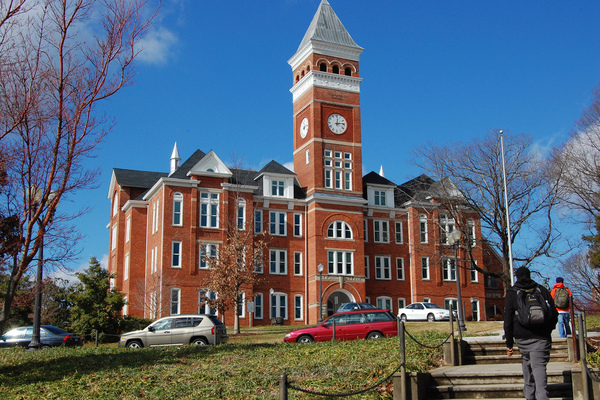 Students at Clemson University who refused to leave a campus building they had attempted to occupy experienced a surprise — and a bitter taste of the cruel, real world — Thursday evening when police arrested them.

The brief occupation began, as such occupations often do these days, with a set of seven demands — and seven grievances — posted by a student group called See the Stripes.

The occupiers’ motley list of demands includes a demand that the taxpayer-funded university “prosecute criminally predatory behaviors and defamatory speech” on social media. See the Stripes also seeks a multicultural center which will serve as “a safe space” for minority students and a new name for Tillman Hall, a campus building named after white supremacist Democrat Benjamin “Pitchfork Ben” Tillman. Additionally, See the Stripes members say they remain really mad because a fraternity threw a “Crip-mas”-themed Christmas party well over a year ago.

The protest began on Wednesday night on the steps of Sikes Hall, an administrative building which houses the office of Clemson’s president, James P. Clements. A small group of protesters slept in front of the building in tents and sleeping bags, according to local Fox affiliate WHNS.

What a bunch of losers. You want to be ‘safer’ than everyone else? It’s called ‘protective custody’. In the meantime, please feel free to stuff your free space. It played out this way for the radicals… a group of students decided to inhabit Sikes Hall. Next, Clemson administrators warned the students that they would be arrested if they did not decamp from inside the building by 5:30 pm on Thursday. Some of the protesters chose to leave. Five students opted to stay and the police arrested them. Police cited Adrian Lydell Carson, Jeremy Ian Anderson, Darien Jamal Smith, Me’khayla Oneal Williams and Rae-Nessha Nichole White with trespassing on public premises outside of ordinary business hours, reports Greenville, SC NBC affiliate WYFF. As far as I can tell, four were black and one was white. The “Clemson Five,” as supporters have taken to calling them, were then released on their own recognizance and ordered to appear in municipal court. The arrests at Clemson mark the second time this month that school officials have chosen to treat occupying protesters as criminals who are breaking laws. This is exactly what should be done and we need more of it.