This doesn’t look like a joke to me.[1] Not at all. Students at Youngstown State University in Ohio this morning found a shocking message on rocks that are painted to reflect school spirit. This was something else altogether. Pro-ISIS messages were spray-painted on rocks around campus. “We are coming for you,” said one; another said: “France deserves destruction,” referencing the recent Paris terror attacks that left 132 dead and over 350 wounded. Students sent pictures of the rocks out via social media and it immediately went viral. Little wonder… the authorities can claim all they want there is no credible threat, but that sure looks like a threat to me. No wonder those students are scared. They are wondering if attacks will hit the school. There are about 15,000 students there. Meanwhile, Obama is doubling and tripling down on bringing in even more refugees that no doubt have ISIS members in their midst. That’s not the change these students had in mind. 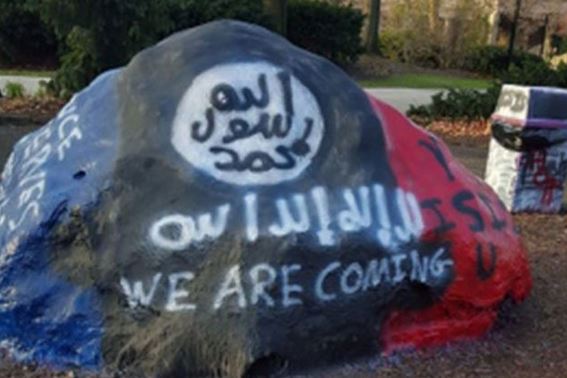 Youngstown State University students awoke to pro-Islamic State messages painted onto a rock on campus when they awoke Monday morning.

“We are coming,” read one message on the rock. 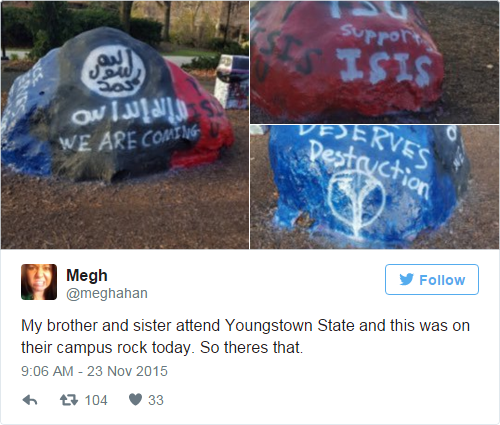 Students were sent a text message from the university that said the painting is not viewed as a “credible threat.” 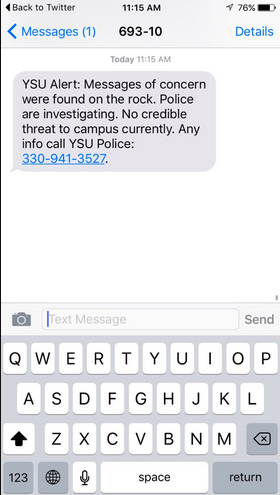 Shannon Tirone, associate vice president for university relations, told TheBlaze Monday morning that campus police are working with the local Youngstown Police Department as well as the FBI to determine who wrote the threatening message. Tirone said officials are reviewing security cameras in the area.

“We take those threatening messages very seriously,” Tirone said. “With everything going on around the world today, we make sure we look into everything.”

Tirone added that the university is prepared to prosecute the individual or individuals who wrote the messages to the fullest extent for inciting panic on campus, regardless if those responsible are actually affiliated with the Islamic State or not.

Meghan Brammer, who posted photos of the rocks to social media and has two siblings who attend the university, told TheBlaze that the images were “scary,” especially considering recent events.

“Whether it was serious or just someone pulling a prank — its not something to joke around about,” Brammer said.

A campus police officer told TheBlaze he knew of painted rock and his department’s involvement in to the investigation but was not authorized to speak to the media.

The message was painted on the rock either late Sunday night or early Monday morning, Tirone told TheBlaze, adding that the rock is typically used to promote school spirit, homecoming events or student organizations. The pro-Islamic State messages have already been painted off by late Monday morning.

Youngstown State is an urban research university with approximately 15,000 students in northeast Ohio.

The rocks have now been painted over. It’s bad school PR. “Messages were found painted on the rock on the Youngstown State University campus core on Monday, Nov. 23, that were found to be of concern. YSU Police are investigating the situation,” the university said in a statement. Shannon Tirone, associate vice president for university relations said, “Unfortunately, this is the world we live in today.” Yes and you can thank Barack Obama and other leaders for that slice of hell. Students are disturbed by the messages, with the mother of two students telling ABC[5] that “they were in fear and now have anxiety over what was seen.” And freshmen Jacob Croach and Bruno Abersold said they were heading home early as a precaution. “Whoever did this to the rock needs [to be] expelled,” added Alex Welsh, another student, via Twitter. “ISIS is not some joke. Terrorism is not a joke.” No, it’s not… it’s deadly serious and it’s here. 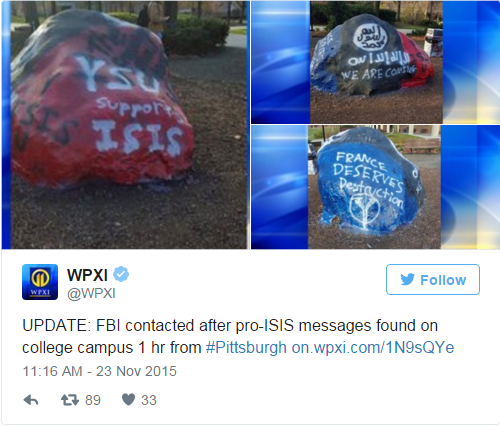 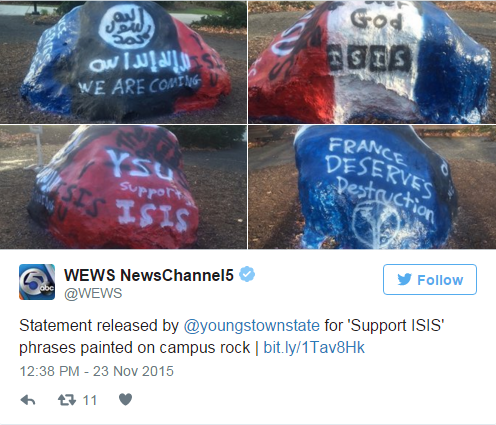