People support authoritarian measures because they mistakenly believe they will be the one wearing the boot stamping a human face. In reality, someone else wears the boot. That’s why when free speech dies, everyone suffers. The Washington Examiner’s Adam Steinbaugh reports on campus complaints of offensive speech:

I surveyed more than 230 such reporting systems for the Foundation for Individual Rights in Education and asked dozens of schools for records about their Bias Response Teams. What I found is detailed in a new report describing how universities broadly define “bias” to include virtually any speech, protected or not, that subjectively offends anyone. …

The threat to expressive rights isn’t confined to speech from the Left or the Right. Bias reporting systems are being used to report all kinds of speech.

At Appalachian State University, students reported on one another for chalked messages that were pro-Trump as well as chalked messages calling Trump a “RACIST.” The former were reported by students as “hate speech,” the latter “politically biased slander” that was “unlawful.”

While students at Ohio State University reported each other for comparing Hillary Clinton to Hitler, students at Texas Tech were whispering to administrators that the Black Student Union’s tweets in support of the Black Lives Matter movement offended them. Meanwhile, the University of Oregon saw it fit to dictate “community expectations” to students who had the audacity to complain about oppression.

Yes, complaining about oppression may bring the Bias Response Team to your dorm room to explain why your views were insufficiently polite, decent, and non-controversial.

Going to college these days must be like enduring one of those excruciating social situations where if you make any comment more meaningful than weather observations, you will be treated like you let rip with a robust air biscuit.

Free speech is either for everyone, or it is for no one. 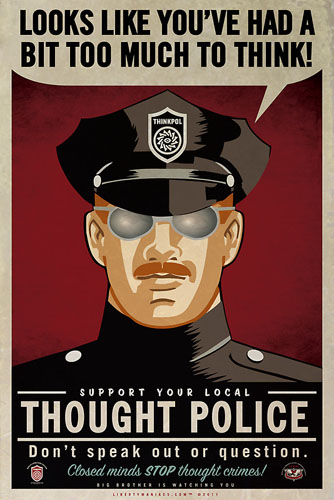 Speak in inanities or they will think you’ve been thinking.

On tips from Bodhisattva and Anonymous. Cross-posted at Moonbattery.