College Students Taught That Capitalism Is to Blame for Poverty

Students in a sociology class at Indiana University-Purdue University Fort Wayne (IPFW) are required to read a textbook that blames poverty on capitalism and claims that teaching American exceptionalism has “racist overtones.”

The textbook, titled In Conflict and Order: Understanding Society, is required reading for a Principles of Sociology class (S161) at IPFW taught by Robert Pettit, which qualifies as a 3-credit general education requirement and is an introductory course for sociology majors.

Not only does the book tell readers that teaching American exceptionalism has “racist overtones,” but [it] also insists that America’s emphasis on equality is inconsistent with its practices, and even claims that “the basic tenet of capitalism—who gets what is determined by private profit rather than by collective need—explains the persistence of poverty.”

To paraphrase Marx: from each according to their ability, to the government according to the collective need. Enslaving the entire population worked in the Soviet Union — for a while, sort of.

If you like what’s going on in Venezuela right now, you will love the future the liberal intelligentsia has planned for us. 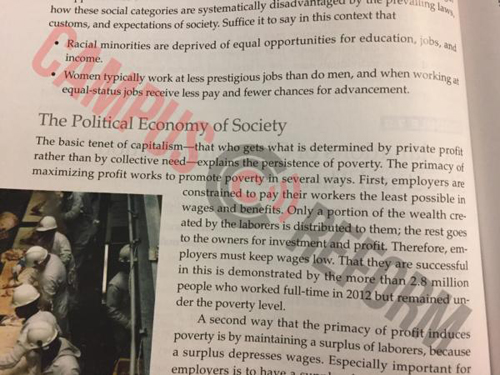