Despite higher education having succumbed utterly to the cultural Marxist march through the institutions, students are still learning something. They are learning what moonbats want them to learn:

A discussion scheduled for later this month at California State University San Marcos appears slated to delve into the wild world of animal-based sex fetishes.

The event, “Furries Vs. Pet Play,” is one among many slated as the campus marks “gAyPRIL,” billed on the school’s website as a monthlong campuswide celebration of the lesbian, gay, bisexual, transgender, questioning and ally community.

A brief description of the 50-minute discussion, set for April 25 at the campus LGBTQA Pride Center, states on the university’s website: “How much do you know about these two groups? Do you know that they are two different fish in a pond. Come find out why in this weekday discussion.”

Online definitions of “furries” vary, but basically it’s a group of people who enjoy dressing up in human-sized animal costumes. They like to call themselves a “community” and often get together through large conventions. Not all furries turn their fascination into a sexual thing, or have sex in their costumes, but plenty do.

Anything goes on college campuses these days, so long as liberals like it. But I doubt Nazi furries will be welcome to make a pageant of their perversity at Cal State.

Isn’t all this covered in grade school nowadays? 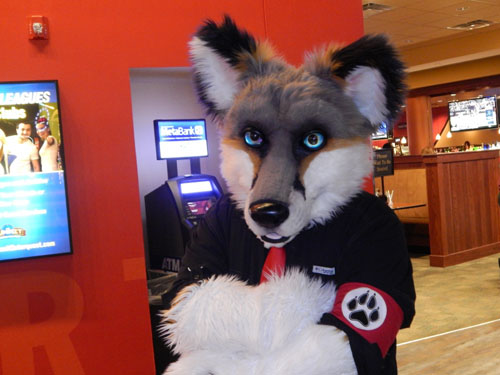 On tips from J and Brian H. Cross-posted at Moonbattery.