In the sort of creepy move you’d expect to see in Saddam Hussein’s Iraq or Kim-Jung-Il’s North Korea, high school bands in Oregon are being used as propaganda organs for Obamacare[1]. 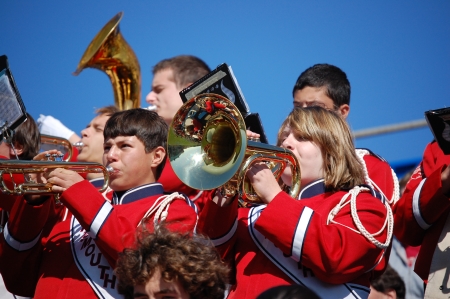 The Oregon: agency behind Obamacare-promoting,: taxpayer-funded ads that have garnered national attention for their: hipster: and: trippy: vibes defended the spots Wednesday.

And next up? The agency will be looking for high school marching bands to play the pro-Affordable Care Act anthem in a contest aimed at bringing more attention to the government-funded health care exchange.

That’s right. High school bands in Oregon are being asked to play Obamacare songs. The prize?: A chance to play at the Oregon-Oregon State game in November:[4]

Liberalism may be a selfish, completely dysfunctional ideology that’s destroying America, but at least liberals can take comfort in the fact that they’re good at indoctrinating children.