A grade school in NYC teaches white kids that they are “born racist.”[1] That’s probably not a good idea. No one is born racist. You have to learn racism. Then you have to decide if racism is for you. But one is not exactly born racist. If I was a first grader and saw a black person and white person holding hands, then I wouldn’t think anything of it. People are people. The only way to get rid of racism, is to stop talking about it. 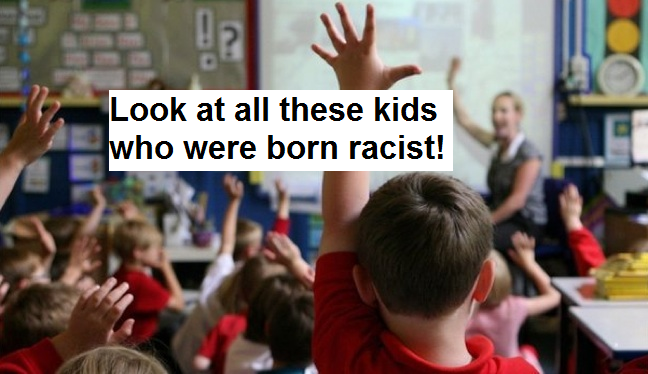 At the Bank Street School for Children black students are provided a “dedicated space” to complain about their victimhood while their white counterparts are forced to focus on their “European ancestry” and its link to “white privilege,” according to a slide obtained by the New York Post.

“Ever since Ferguson, the school has been increasing anti-white propaganda in its curriculum,” one parent told the Post.

A young white female student is even seen on a school video saying “I feel guilty for having a privilege I don’t deserve,” according to the Post.

“Bank Street wants to give kids of color a space to talk about shared experiences,” she said in a handout given to parents, “because even in society today, people of color are treated unfairly.”

“One hundred percent of the curriculum is what whites have done to other races,” another Bank Street parent said. “They offer nothing that would balance the story.”

“Any questions they can’t answer they rationalize under the pretense of ‘institutional racism,’ which is never really defined.”

I would be disgusted with the curriculum and activity that this school provides to children as a service. It sounds like the worst school you could ever send a child to.