Even Math Is Made to Serve Moonbattery

“Teaching Social Justice through Secondary Mathematics” is a six-week online course designed by Teach for America and offered through EdX, which provides free online classes from top universities such as Harvard University, MIT, and Columbia University. …

Participants in the online course are given sample ideas for lessons they could create, such as using math to teach students about “Unpaid Work Hours in the Home by Gender” and “Race and Imprisonment Rates in the United States.”

The module also identifies five main themes of “intersectional mathematics,” including “mathematical ethics,” which refers to the notion that math is often used as a tool of oppression, according to the instructors. 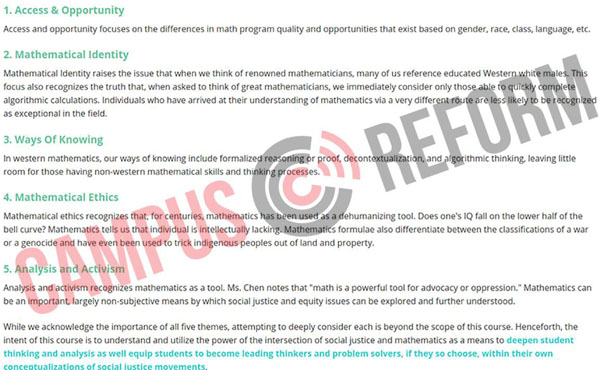 In madrassahs, kids waste their intelligence rocking to and fro as they recite the Koran. American classrooms may come to resemble them, when math and science are discarded altogether in favor of reciting pernicious liberal shibboleths.