What goes around, comes around. Progressives are fond of waging lawfare. It not only cripples their opponents, but humiliates them by forcing them to turn over absurdly large amounts of money, as when Aaron and Melissa Klein were economically hobbled by being forced to pay nearly $137,000 to the pair of LGBT thugs who ruined their business for being Christian. The progressives running Evergreen State College are getting a taste of this medicine from disgruntled liberal professor Bret Weinstein.

Ever eager to pander to the whims of leftists, educrats left Weinstein at the mercy of a vicious mob of their own creation. Now we read this:

Weinstein and his wife, Heather Heying, have filed a standard Tort Claim form against Evergreen State for a sum of $3,850,000. …

The factual narrative submitted alongside the tort claim argues that Evergreen State “has permitted, cultivated, and perpetuated a racially hostile and retaliatory work environment,” asserting that “Through a series of decisions made at the highest levels, including to officially support a day of racial segregation, the College has refused to protect its employees from repeated provocative and corrosive verbal and written hostility based on race, as well as threats of physical violence.”

Nothing lights up a smile like the spectacle of moonbats hoisted with their own petard.

Weinstein got on the wrong side of his fellow libs at Evergreen State by objecting to its “Day of Absence,” during which all whites are expected to stay away from campus.

Additionally, the factual narrative of the case blasts the college for its policy on the “Day of Absence,” an event that asked for white students faculty and staff to leave campus for a day of diversity programming. …

“In doing so, TESC [The Evergreen State College] continued to support its racially discriminatory conduct, publicly rejecting Professor Weinstein’s complaints of racial segregation for which he has been repeatedly excoriated, threatened, attacked, and wrongly accused of being a racist in the workplace, for months,” the narrative concludes.

As mentioned recently, totalitarian movements like the one currently posing as “liberalism” invariably eat their own. Weinstein is another example. Rather than passively be stomped on by the Jacobin mob, this worm has turned.

Now for the bad news. If Weinstein collects, the jackpot justice will come largely out of the pocket of taxpayers. The educrats won’t pay a dime. 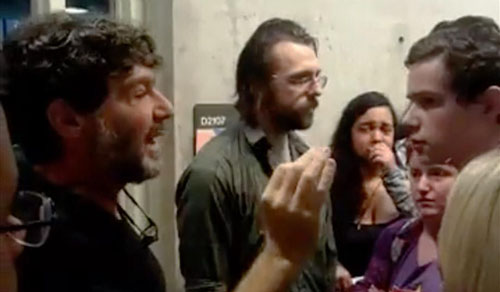 Bret Weinstein and the moonbat mob.