Poor, sensitive snowflakes[1] at Princeton got their triggers pulled by Fox’s Jesse Watters. It’s hysterical! They can’t say ‘ghetto’ or ‘Islamic terrorism’ or ‘radical Islam’. Gee, wonder how they would feel about being beheaded? They are soooo scared of being offensive… it’s pathetic. ‘White privilege’ is tear-worthy. Good grief. They can’t even say ‘Donald Trump’. Watters was totally over the heads of these kids. Talk about clueless. I’m offended by these twits being offended. Banging my head on the desk… again. We are soooo doomed if this is our future. One airhead was so offended she stormed off. 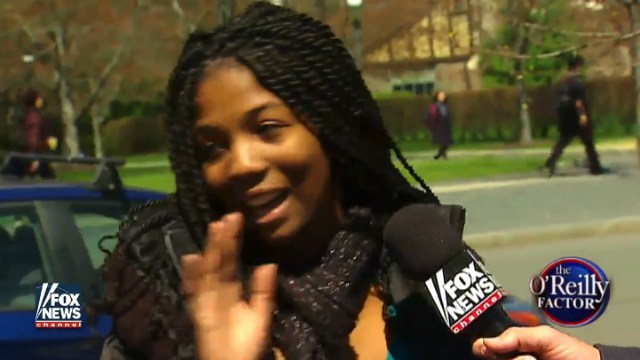 Looking to find out just how sensitive and easily offended college students are, Fox News contributor Jesse Watters traveled to Princeton University to confront students with what many might consider to be “trigger” words.

The first word — “ghetto” — even caused one student to storm off.

Dear Lord, what a bunch of pathetic pansies. I’m sorry… was that insensitive? Did I trigger their outrage? Meh. How in the world will these special individuals survive in the real world? This is what happens when everyone gets a trophy and are told how great they are. We’ve coddled a whole generation to death. Not only do they never leave the nest, they’d die if they tried. Frankly, you couldn’t pay me to attend some of these universities, much less have my kids go to them. They produce brain dead zombies incapable of survival. The video is truly funny and in a sense, depressing. Watters is always fantastic though.