HARVARD SAYS: Teach People About Police Brutality, To Welcome Syrian Refugees and THIS!

Harvard has advised students to lecture their non-Ivy-League relatives on liberal values in a bizarre set of holiday place mats to take home over Christmas. This is so stupid:[1] 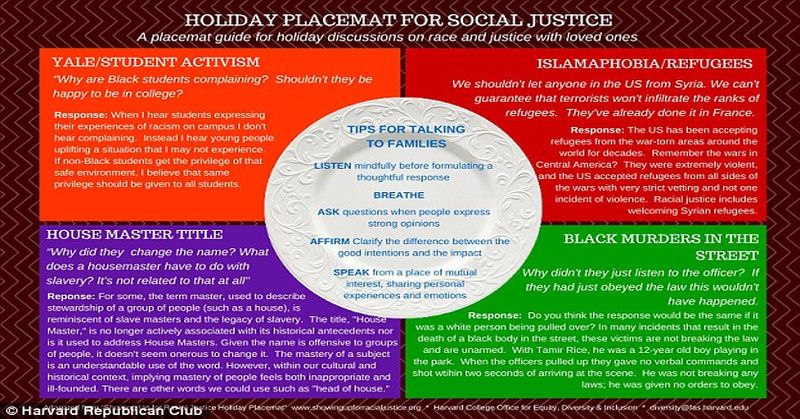 The laminated cards raise some likely hot topics that lesser-educated family members may raise at the dinner table, then offers a suggested response.

One question to be braced for is: ‘Why are black students complaining? Shouldn’t they be happy to be in college?’
In response, the worldly scholars should ‘calmly’ explain: ‘When I hear students expressing their experiences on campus I don’t hear complaining.’

Students are also told what side to take on the issue of murdered black teenager Tamir Rice in 2014 – an issue which continues to divide the country.

To make it through the spate of pesky questions, Harvard advised, students should ‘breathe’ and ‘listen mindfully’.

The cards have sparked outrage, with many slamming the creators for telling students what to think about highly complex talking points.

Final-year student Aaron Hendricks told the Harvard Crimson: ‘I don’t think that’s the place of any Harvard employee to tell students the right way to think about the Syrian refugee crisis.’

Now, two deans have come out to apologize for the stunt.

Thomas Dingman, dean of freshmen, and Stephen Lassoed, dean of student life, said in a letter to students on Wednesday: ‘We write to acknowledge that the placemat distributed in some of your dining halls this week failed to account for the many viewpoints that exist on our campus on some of the most complex issues we confront as a community and society today.

‘Our goal was to provide a framework for you to engage in conversations with peers and family members as you return home for the winter break, however, it was not effectively presented and it ultimately caused confusion in our community.’

I’m so printing these for the holiday meal at my house. My family will get a good laugh out of this idiocy.