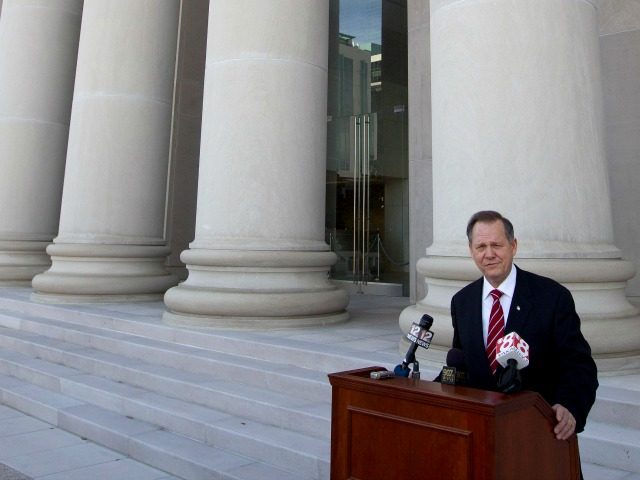 In a two-minute video posted on his Twitter account, the former Alabama Supreme Court Justice Roy Moore gives his opinion on the place of the federal government in the education of the next generation.

He makes the case for getting rid of federal involvement in local education with a few arguments we don’t see that often, one of which is that if states are forced to compete with each other for the best educational system, the competition will lead to better education overall. Here’s the tweet:

And here’s the transcript of that video if you prefer to read instead of watch (emphasis mine):

Education has always been in the purview of the parents. They know best how to educate their children. The states have various, different forms of education, but the federal government has no involvement in education under the Constitution.

I remember back in the days of Reagan and we talked about this and doing away with the education department. I would have no problem with it being turned back to the states, I think competition between the states is good, I think it will improve the educational system, and I think if they can use their own money for their educational system, they can give tax credits, they give charter schools, they give Christian organizations the schools. There’s many different forms of education, and I think we got to instill in the students the willingness and the ‘want to,’ if you will, to become educated.

My dad taught me when I was a kid that there’s one thing  no one can take from you, is your education. If you become educated, they may criticize your techniques, your motives, or whatever, but they can’t say that you’re not thoughtful enough to think about them. I think education is very valuable and I don’t think we’re doing it right in our country. And I think the federal government should have no involvement in education.

Common Core is an example of an attempt to indoctrinate our children with ideas that most people — at least in Alabama — don’t agree with. And yet it’s pushed on us by using our own tax money to buy our children over. And I think that’s very wrong. I oppose Common Core, I think it’s a very bad thing, and I think it should be stopped in Alabama.

In the last few months, new pushes to end federal involvement in education have been getting popular.

Back in February, the Kentucky Republican Rep. Thomas Massie introduced a measure that was only one sentence long:

The Department of Education Shall Terminate on December 31, 2018.[3]

With schools already getting back into session, it’ll be interesting to see if the students will also start to make their voices heard about the educational future of the country.

The responses have been hilarious, with one Twitter user saying that parents in Alabama beat and starve their children, therefore Big Daddy Government needs to take care of them instead.

Parents beat, neglect and malnourish their children every day. I'm going to guess that happens in Alabama. I disagree, heartily.

Arguments for getting the federals out of education are based on competition, tax savings and keeping political beliefs out of the school system.

Arguments against these measures are mostly reliant on the belief that parents are idiots.

If parents are capable of educating their kids, we would have never had schools formed OR laws requiring children to be given an education.