Leftist Hooligan May Be Rewarded With Scholarship for Destroying Veterans Memorial

You know academia has reached the last extremes of derangement when sociopaths are awarded scholarships specifically for their criminal behavior:

The student charged with pushing down the Confederate statue in Durham, North Carolina on Monday may be rewarded with a scholarship for her actions from North Carolina Central University.

The Chronicle of Higher Education reported on Wednesday that proposals are being made at the college to award Takiyah Thompson, who has been charged with two felonies—participation in a riot and inciting others to riot—for her actions.

Guess who would foot the bill for the scholarship? NCCU is a public university.

News that Thompson was involved in the demonstration was reportedly met with widespread support from campus faculty and students in her Introduction to Political Science class.

“I saw the demonstration and the toppling of the monument. I think it’s a healthy thing for students to have a voice and to be leaders in activism,” said Jim C. Harper II, chair of the history department. “We’re going to do everything we can to support Ms. Thompson.”

Thompson is a heroine for desecrating a memorial to young men who died defending their land. A professor at NCCU’s law school is representing her pro bono.

NCCU is a black university, which unfortunately makes it particularly likely to serve as a breeding ground for ultra-left radicalism. But this appalling story offers a clue as to the subversive cultural Marxist rot liberal social engineers are teaching in history, political science, and law classes throughout academia. 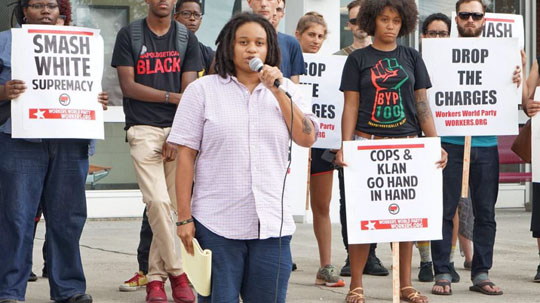 Takiyah Thompson could have a future in politics.